UAS Market Forecasted to be Worth $70.9bn Over Next 10 Years 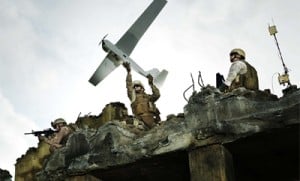 AeroVironment's UAS in action with the US Army

According to Forecast International’s senior unmanned vehicles analyst, Larry Dickerson, the world’s appetite for unmanned aircraft systems (UAS) appears insatiable. “Just when you think the UAS market cannot go any higher, it does,” he said. “No matter how many systems are built, operators want more.”

The UAS market has seen unprecedented growth since 2001, with current projected value over the next 10 years estimated at $70.9 billion, according to Forecast International.

“Million-dollar UAS contracts used to be big news,” Dickerson said. “Awards are now in the billions and climbing.” He notes that sales are growing in Asia even as purchases by the United States have slowed. Still, the U.S. will spend some $13.7 billion on UAS procurement and $11.6 billion for research programs through 2021.

Of the estimated $70.9 billion market for UAS reconnaissance systems over the next 10 years, $39.2 billion will come from production, another $28.7 billion will be earmarked for research and development, and perhaps $2 billion to $3 billion will be the result of UAS services contracts. The United States remains the driving force behind this market, but spending in other areas of the world is increasing.

U.S. research and development spending will amount to $11.6 billion over this period – about 40 percent of the worldwide total. Europe and Asia will spend $8 billion and $7.1 billion on research, respectively.

U.S.-based companies will account for 41 percent of this market’s production value, or $16.5 billion, and could gain more in the future.

Spending on unmanned aircraft is increasing in Europe and Asia. Europe is slated to spend $5.7 billion on unmanned aircraft systems. European governments are working on their own unmanned aircraft programs, but a shortage of funding is hindering certain research and procurement efforts. Despite the arrival of new European-designed systems, European nations will still make large purchases of non-European systems.

Asia will spend $14.3 billion on unmanned aircraft. China could account for some 60 percent of this spending. Beijing will acquire few foreign systems, depending instead on local firms to meet the majority of its needs.

“The civilian UAS segment of this market is also growing. It may not be as extravagant as some observers believe, but it could be worth $600 million to $1 billion over the next 10 years,” Dickerson said.