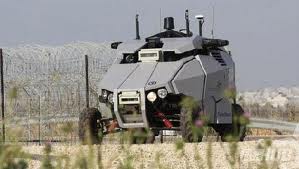 A new initiative by the IDF that began in 2008, the Guardium unmanned ground vehicle (UGV) has seen a gradual introduction to everyday service. A result of a joint program between Israel Aerospace Industries and Elbit Industries, the Guardium is one of the first regularly operating unmanned security vehicles in the world.

The unit began as a small group of combat engineers who were assigned to a one-year pilot program. “When we first started operating the Guardium, it had its issues. It broke down constantly, and often needed to be rescued,” said Sgt. Vidal. “For that you needed combat soldiers who were also mechanics.” Today the system runs flawlessly, taking on a wide array of missions. Its reliability has reached the point where Sgt. Vidal is the only mechanic in the unit.

AN EXTRA SET OF EYES

Platoon commander Lt. Kai Hajbi elaborated on some of the responsibilities her unit assumes. “We have a very flexible mission and our activity varies daily. We do patrols, but we are not on a 24/7 schedule yet. However, we are always on call to respond to events quickly,” said Lt. Hajbi.

The Guardium is able to patrol independently, but is most effective when adding an additional layer to infantry patrols. “We often patrol alongside infantry forces. We operate parallel to the infantry, on a path much closer to the fence. We provide an extra set of eyes that are looking from a more dangerous position while keeping soldiers out of harm’s way,” said Lt. Hajbi. “We rely on infantry to deal with hotter events, but they rely on us just as much. It’s a symbiotic relationship.”

The wide array of observation capabilities makes the UGV a very useful tool. “We can recognize buried explosives, footprints, and people creeping towards the fence. We make excellent use of a wide range of observation equipment and cameras,” said Sgt. Vidal.

The Guardium joins the ranks of one of the most elaborate border observation systems in the world. Joining stationary border observers from the Field Intelligence Corps, infantry patrols, and aerial surveillance, the Guardium occupies a very specific niche. It can either act as a fast-response force, or provide around the clock surveillance from the ground.

“We’ve seen several scenarios where the Guardium has proven its effectiveness,” said Lt. Hajbi. “In one scenario, a mortar had struck the fence punching a whole through it. The Guardium provided 103 consecutive hours of around the clock surveillance without tying up essential infantry forces or placing soldiers in danger.”

“In another circumstance, there was a protest on the border right in front of one of the observation posts. From her post, the camera operator could only see the protestors. However, as the vehicle came around the other side, it caught someone digging in the ground hidden by the protestors. We alerted the forces in the area and allowed them to respond,” said Lt. Hajbi. “Without the Guardium, we would have missed that.”

PREPARING FOR THE NEXT GENERATION

The vehicle itself is has a wide range of capabilities, allowing it to operate on a variety of missions. The design is modular, allowing for the placement of different observation or mission packages based on the task at hand. In addition, although the vehicle is being operated from a war room, it has the ability to act autonomously, both driving itself and responding to obstacles and events.

“Within the next year and a half, we are expecting to receive the next generation of vehicles,” said Lt. Hajbi. “The new generation will have even greater capabilities, including more mission packages, a larger platform, and the ability to operate for longer periods.”

“The arrival of the new UGV won’t spell the end of the old one,” said Sgt. Vidal. “The IDF is looking to expand the program, it’s just a matter of time and money. There are many other suitable borders that can really benefit from the vehicle, including the Egyptian border, the Jordanian border, and the southern border near Eilat.”