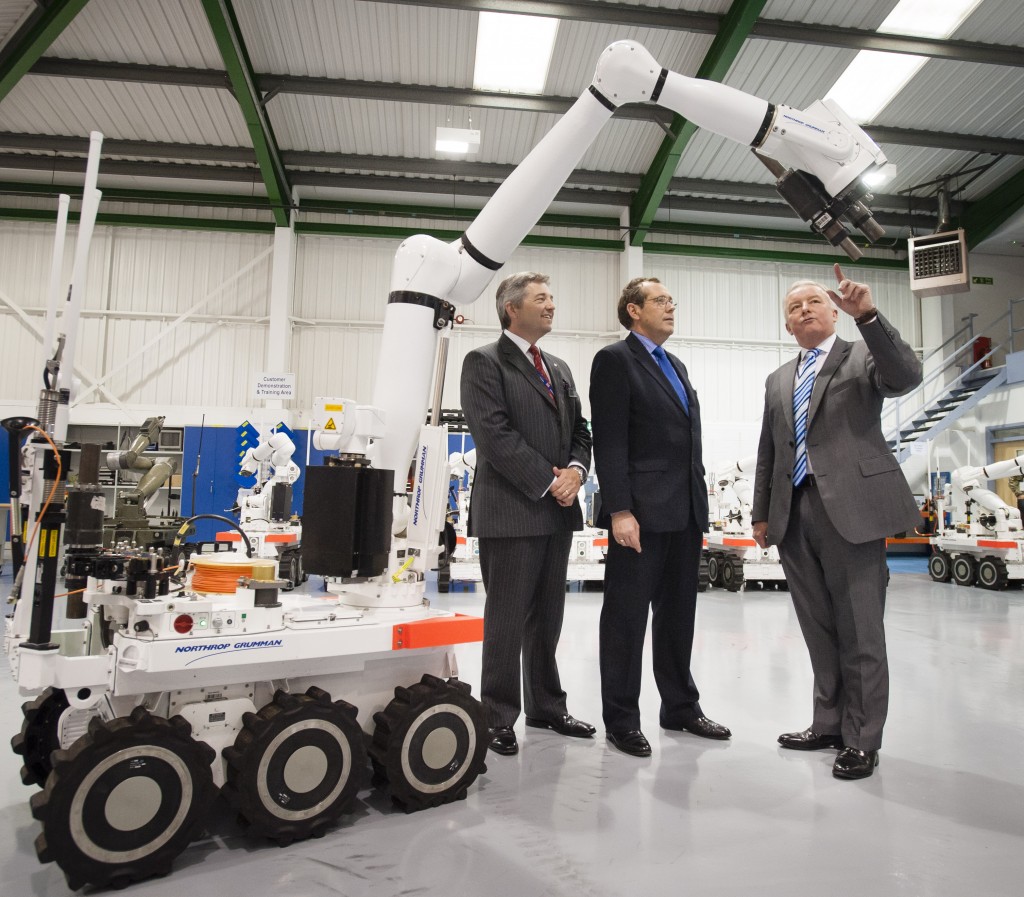 Northrop Grumman Corporation welcomed the Minister for Defence Equipment, Support and Technology, Peter Luff MP, to the company’s production facility for unmanned ground systems in Coventry, U.K. The visit marks the in-service date with the British Army of CUTLASS, the next generation of remotely controlled vehicle for hazardous duty operations developed for the Ministry of Defence (MoD).

The minister was joined during the visit by Peter Worrall, chief of Materiel (Joint Enablers).

“CUTLASS will significantly enhance the ability of users to defeat and dispose of unexploded ordnance and improvised explosive devices (IEDs) from a safe distance, and also to provide forensic information systems capability for national security and resilience,” said Danny Milligan, chief executive, Northrop Grumman Information Systems Europe. “The unique knowledge and experience that we have gained in this domain has helped us to deliver this important next generation of improvised explosive device disposal capability and we look forward to exploiting the potential opportunities for exporting this capability into international markets.”

“The rollout of CUTLASS to the armed forces marks an important milestone in our successful 20-year relationship with Northrop Grumman. CUTLASS is a world-class product that will provide our U.K.-based bomb disposal teams with a state-of-the-art capability to help protect them and the public from the threat of explosive devices. This technologically advanced device showcases the engineering excellence of Northrop Grumman and the U.K. subject matter experts who have been involved in its development.”

The CUTLASS system offers the latest technology in a modular design, enabling the user to deal with the full range of both military and improvised explosive devices. Its highly versatile design means that it is capable of accommodating a wide range of payloads, sensors and tools.

The manipulator arm is equipped with a three-fingered state-of-the-art gripper and has nine degrees of freedom for greater movement and agility inside limited spaces, such as the interior of a car. The robot is able to creep along at deliberately slow speeds for delicate operations and may accelerate to high speeds to enable rapid travel. The six-wheeled design offers mobility on all types of hard and soft terrain and in all weather conditions.

Northrop Grumman’s unmanned ground vehicle business has been established in Coventry for more than 20 years. Today, the company designs, develops and manufactures in the U.K. some of the most capable and reliable unmanned ground vehicles available, from the Wheelbarrow bomb disposal robot to CUTLASS, the latest vehicle for hazardous operations developed for the MoD.

The company’s wide range of unmanned vehicles can be configured according to the operational requirements of the user including explosive ordnance disposal, ground surveillance, hazardous material and chemical, biological, radiological and nuclear missions. Northrop Grumman has more than 2,000 unmanned ground vehicle systems in operation around the world.