When Usain Bolt ran the 100 meter in 2009 he set a new world record of 9.58 seconds. His average speed was 23.35 mph, but his peak speed for the best 20 meter split was 27.78 mph, according to IAAF data. The Cheetah Robot’s fastest 20 meter split was 28.3 mph. To increase the robot’s running speed from its previous best of 18 mph, the engineering team refined the control algorithms that coordinate the robot’s leg and back motions and increased the installed power. 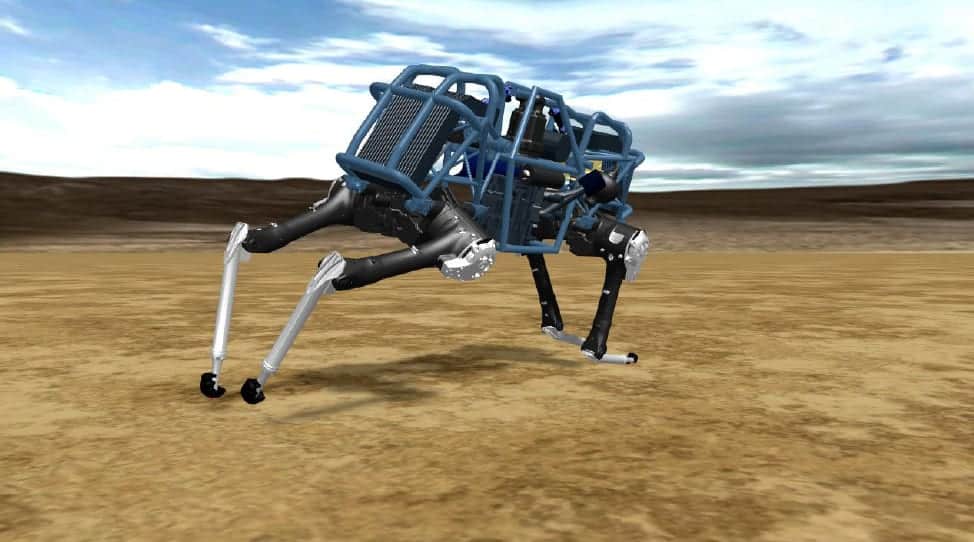 WildCat – Concept diagram for WildCat, a free-running outdoor Cheetah Robot that is in development and scheduled for testing in 2013

“Achieving 28 mph on the treadmill is quite a challenge and accomplishment, for which I commend our robotics team,” said Dr. Alfred Rizzi, technical lead for the Cheetah effort and Chief Robotics Scientist at Boston Dynamics. “But our real goal is to create a robot that moves freely outdoors while it runs fast. We are building an outdoor version that we call WildCat, that should be ready for testing early next year.”

The Cheetah Robot is funded by DARPA’s Maximum Mobility and Manipulation (M3) program, which focuses on making fundamental advances in robotics, both theoretical and experimental. While the M3 program focuses on basic research, fleet-footed robots such as the Cheetah could have a wide range of military and civilian applications, such as emergency rescue, disaster response and other applications where rough terrain limits the mobility of conventional wheeled and tracked vehicles.”