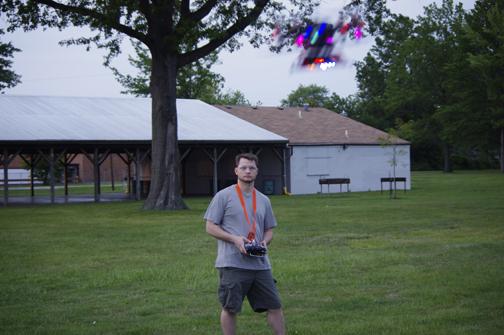 MORNING JOURNAL/JASON HENRY Matt Mishak controls a multicopter drone during a demonstration of their abilities in preparation of his LCCC class.

Students will build and learn about UAV drones during the first five weeks and then focus on rockets for the final five.

Linger said the rockets are roughly six-to-seven feet tall and launch a mile to a mile and a half into the air.

Mishak, an Elyria city prosecutor, found a fascination with drones while working as lab aide in LCCC’s Fab Lab.

He and his business partner Mike Hanna own the workshop Dronewerx in Elyria, which builds high-quality UAV frames, he said.

The class will build fixed wing multi-rotor helicopter drones, but Mishak said he plans to bring in various crafts from Dronewerx.

Drones in most instances are illegal to fly outside of recreational purposes, Mishak said, but new legislation passed by President Obama will open up the market for UAV designers, pilots and maintenance people, he said.

“We’ll learn about what is going and what is the potential for these air crafts,” he said.

The class will learn about the history of drones, current regulations and the potential opportunities opening up in the future.

The Teal Group, an aerospace and defense market analysis corporation, has estimated the unmanned aerial vehicle market is worth $6 billion worldwide annually. By 2012, it is predicted it will be worth $100 billion.

Mishak said in the future people could even see unmanned jumbo jets and more.

“This is a brand new, almost undiscovered industry,” Mishak said. “It is my pipe dream to have Lorain County known for unmanned aerial vehicles and I think having a class where people can get involved in it is kind of the first step.”

Mishak said he brought the idea to Rosa E. Rivera-Hainaj, dean of Science and Mathematics Division at LCCC. She became interested and eventually Linger joined in.

Linger had previously formed LCCC’s aerospace group, Orbit, which competed in a rocket competition in Wisconsin in April.

Because the class is a pilot program, it needs to fill six seats for it to happen, but it could potentially have up to 15 or 20 students, Mishak said.

The class will build three drones.

“We’ve got some cool frames, props and microcontrollers,” Mishak said. “They’ll be learning to program them to make sure they fly right.”

The drones have a number of potential capabilities. Some of them are used for aerial photography. Others are used by law enforcement for scouting and man hunts.

The devices move by remote control for the most part, but many have GPS capabilities, allowing them to hover in one place or return to a landing zone with a flip of a switch. The capabilities allow even novices to fly them as the drone can take over in the event of a pilot’s mistake, Mishak said.

“You simply need to flip a switch and it comes home and lands itself,” Mishak said.  “With a little bit of guidance, almost anybody could fly these.”

The cost of the components have dropped dramatically in recent years.

If successful, the class will expand next semester to include additional aerospace devices, such as nano-satellites.