U.S. Navy to Add Surveillance Drones to its Asia-Pacific Fleet 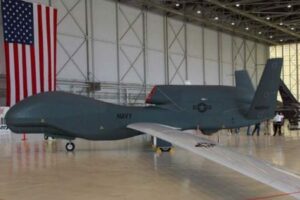 The U.S. Navy is stepping up its ocean surveillance capabilities in the Asia-Pacific region, with new manned aircraft arriving within the next year and preparations for next-generation drones beginning as soon as October 2013.

The advanced aircraft likely will be welcomed by multiple U.S. allies in the region. China’s increasingly assertive claims on much of the East China Sea and nearly all of the South China Sea — including untapped energy reserves and vast fishing grounds — have recently led nations with competing claims to at least consider asking the U.S. for more aerial surveillance.

The P-8 Poseidon aircraft will be stationed at bases in the United States within the next year, replacing the squadrons of P-3 Orion aircraft that regularly deploy to bases in Japan, Naval Air Facility Atsugi officials have confirmed.

Poseidon can operate up to 12,000 feet higher than Orion, which has been continually upgraded since its introduction in the 1960s. Poseidon also is faster and more survivable than Orion during a conflict, said Owen Coté, associate director of the MIT Security Studies Program.

“I would say that P-8 is a better airframe than P-3 for the Western Pacific,” Coté said.

“The new sensors it brings … are also compatible with P-3, so to be fair, it’s really about replacing the airframe, not new anti-submarine warfare capabilities,” Coté said.

While both Poseidon and Orion are primarily made for submarine surveillance and warfare, the Poseidon is also designed to work with the MQ-4C Broad Area Maritime Surveillance Triton, a recently unveiled drone aircraft specifically adapted to watch the world’s oceans.

The BAMS will eventually join the Air Force Global Hawk drones at Andersen Air Force Base in Guam, said Joe Gradisher, spokesman for the Deputy Chief of Naval Operations for Information Dominance.

Preparations for deploying the drones will begin sometime during fiscal year 2014, with operations in the Pacific scheduled to begin about three years afterward, Gradisher said.

“Pacific Command basing plans for BAMS include the use of Guam, but other bases may be considered in the future, subject to combatant commander desires and future diplomatic arrangements,” Gradisher said.

If recent trends over territorial disputes in the east and south China seas continue, those diplomatic arrangements could involve multiple Pacific Rim nations.

Philippine and Chinese ships recently ended a two-month standoff over the uninhabited Scarborough Shoal. Much of the shoal is submerged at high tide, but its surrounding waters are frequented by Chinese fishing boats and surveillance ships, despite its location within the Philippines’’ 200-nautical-mile exclusive economic zone.

“We might be requesting overflights on that,” Aquino told Reuters in July, referring to U.S. Orion flights. “We don’t have aircraft with those capabilities.”

China, Japan, the Philippines, Taiwan, Brunei, Vietnam and Malaysia all have competing claims in the east and south China seas. China has rejected U.S. overtures for multilateral talks, stating that it wished to settle each dispute bilaterally.

Beijing bases its claims primarily on ancient discoveries of the generally uninhabited islands and shoals, but the other nations involved say those claims do not correspond with international law.