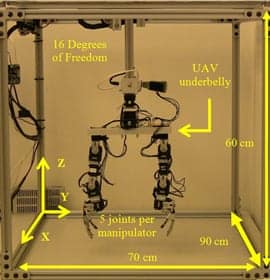 Unmanned aerial vehicles (UAVs), such as those used by the military for surveillance and reconnaissance, could be getting a hand –and an arm– from engineers at Drexel University as part of a National Science Foundation grant to investigate adding dexterous limbs to the aircrafts. The project, whose subject harkens to the hovering android iconography of sci-fi movies, could be a step toward the use of UAVs for emergency response and search and rescue scenarios.

The team, led by Dr. Paul Oh, a professor in Drexel’s College of Engineering and head of the Mechanical Engineering and Mechanics department, will examine the reaction forces and torques associated with applying robotic arms to UAVs as part of his work in the Drexel Autonomous Systems Laboratory.

UAVs currently perform passive tasks such as gathering in-flight visual data and intelligence, tasks that are performed well above ground. Oh’s team is looking at how UAVs might interact with objects at or near ground level. The group’s research focuses on developing what the NSF calls “Mobile Manipulating UAVs” –with arms and hands capable of performing active near-ground tasks. Oh envisions a broad range of applications from infrastructure repair and disaster recovery to border inspection and agricultural handling.

“These types of aircraft will advance field service robotics for things like search and rescue and disaster mitigation,” Oh said. “It could help with infrastructure repair; instead of hoisting someone up to a bridge, these robots might be equipped to fly up to the bridge and start welding.”

The three-year $649,999 NSF grant will charge the group with challenges such as developing a a system that would allow the UAV to interact with objects without upsetting its own stability. Oh developed the proposal and he will be joined in the research by Dr. M. Ani Hsieh, Dr. James Tangorra and Dr. Jin Kang.

To better understand the forces and torques associated with the movements of limbs on a flying machine, Oh and his team intend to retrofit robotic arms and hands onto an adjustable gantry system that is configured to mimic a UAV’s lateral and longitudinal movements. Using the data gained from the gantry testing, Oh hopes to eventually build a working prototype.

“Like all things that fly you want to make sure they don’t crash, and as this type of flying robot starts manipulating things in its environment it can often destabilize the vehicle,” Oh said. “This is a very challenging design problem that nobody else has ever really attacked.”