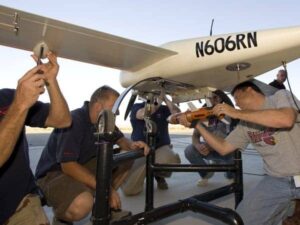 The Pyros missile was attached to a Cobra drone

“All systems functioned perfectly,” said Tom Bussing, vice president of Advanced Missile Systems for Raytheon Missile Systems. “This test demonstrated the technical maturity of Pyros, which is designed from the ground up with small, tactical unmanned aircraft systems in mind. Our next step is to complete ongoing integration work on fielded platforms and prepare for production.”

During the test, Pyros was dropped from a Raytheon Cobra unmanned aircraft in parameters closely approximating those typically seen in current contingency operations. The target simulated insurgents planting an improvised explosive device. While directly over the target, the warhead detonated at a predetermined height following inputs from the weapon’s height-of-burst sensor.

“The warfighter needs a lightweight, powerful, precision weapon that is designed specifically for the UAS platform. Pyros is the ideal solution,” said Bussing.

At 13.5 pounds and 22 inches, Pyros is the smallest air-launched weapon in the Raytheon portfolio.
The gravity-dropped bomb features GPS/INS and digital semi-active laser guidance.
Pyros is small enough to be employed from the U.S. military’s common launch tube.