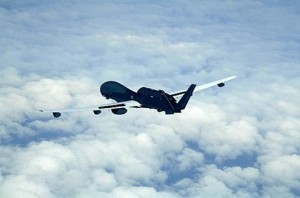 Unmanned aircraft have gained far greater public attention as the Obama administration has made drone strikes a key part of its military strategy. They are now considered potential tools in everything from border security to scientific research.

Anticipation of this expanded role has boosted interest in makers of unmanned aircraft, such as Northrop Grumman and AeroVironment. Satellite companies, too, are hoping that the extensive bandwidth required to operate sophisticated drones will give their businesses a lift.

The majority of drones are using commercial satellite transponders, said Jose Del Rosario, a senior analyst with satellite research and consulting firm Northern Sky Research. The military is seeking to use more government-owned satellites, but he said commercial birds will likely be needed to supplement the fleet.

“Given the demand that we’ve seen over a decade now, the military simply can’t rely on its own because of the bandwidth requirements,” Del Rosario said. “They can’t keep up with their own demand.”

For commercial satellite firms, the growth could mean opportunity. Inmarsat — which provides satellite communications — has seen its work grow as troops in Afghanistan, facing a tough environment, had to rely on satellite, rather than ground-based, communications.

Drones, deployed in the United States or abroad, could be an area of growth as Afghan business shrinks.

“The payloads are increasing, the bandwidth requirement — and there are more and more of these UAVs out there,” said David Helfgott, president and chief executive at the Herndon-based Inmarsat Government.

At Intelsat General, a Bethesda-based subsidiary of the Luxembourg-based satellite firm, President Kay Sears said supporting the satellite communications needed for unmanned aircraft would be a natural fit for commercial satellite businesses.

Government business makes up about 20 percent of Intelsat’s revenue and has increased over time.

Still, there are skeptics. Loren Thompson, a defense industry consultant, said it makes sense in sensitive missions to use satellites dedicated to government use.

What seems certain, most agree, is the government is likely to rely more and more on drones.