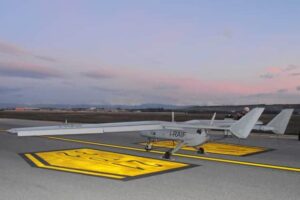 SELEX Galileo, a Finmeccanica company, has announced a further export customer for its Falco Tactical Unmanned Aerial System (TUAS). This new sale brings the total number of nations who have purchased the Falco to four, while the worldwide operating fleet exceeds fifty air vehicles.

In another UAS development, SELEX Galileo has released photos of the company’s new Falco EVO undergoing a runway rollout – the final step before the official “maiden flight”, which is expected to be held this week and will be followed by a comprehensive flight test campaign.

“From the smallest sensor to the most fully-featured tactical system, at SELEX Galileo we understand what makes UAS tick.” said SELEX Galileo CEO Fabrizio Giulianini, adding
“We’re proud to be the only European company to have exported a tactical UAS, with its integrated mission system, developed and produced in house, and we expect our next
member of the family, the Falco EVO, to enjoy a similar market success.”

The high-end tactical Falco UAS has been flying with international customers in high threat area since 2007.