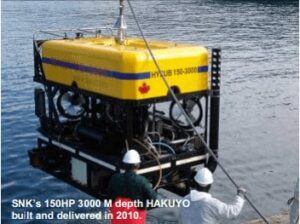 International Submarine Engineering Ltd is pleased to announce a contract to build another HYSUB Remotely Operated System (ROV) for SNK Ocean Co Ltd, a Japanese marine services company based out of Tokyo, Japan. SNK will be provided with a 100HP ROV with depth capability to 2000 meters.

This 100HP ROV with TMS joins several other ISE ROVs that SNK has in its fleet. The ROV will be outfitted to perform tasks that will assist biological studies. SNK enhances its services with an ROV that will include six thrusters – four forward and two vertical, support for six lights, eight cameras, Imagenex sonar, collection basket with hydraulic door with the skid, tether management system, and ISE’s control system, ACE.

Vehicle delivery is scheduled for March, 2013.