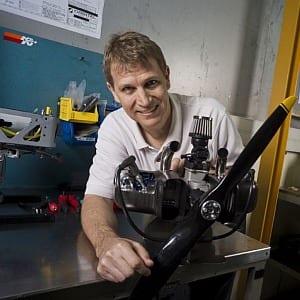 Perth’s Orbital Corporation has won a major contract from Textron subsidiary AAI to provide engines for unmanned aerial vehicles to be operated by the US Navy.

Orbital developed the Heavy Fuel Engine, nicknamed ‘redback’ by Orbital’s staff, with AAI’s Australian operation Aerosonde to power UAVs which will see service with the US Navy’s Special Operations Command.

The redback engine is a two-stroke, single-cylinder unit manufactured from lightweight materials, and is designed to run on heavier JP5 and JP8 military kerosene-based fuels. Orbital says that the miniature engine, which can fit into a shoebox, has advanced fuel injection systems which provides for greater reliability, longer endurance and larger payloads than existing UAV engines.

“This is a good example of Australian innovation and demonstrates our engineering and product development capabilities,” said Orbital CEO and managing director, Terry Stinson.

The contract is worth up to $4.7 million through 2012, and is expected to open the way for more UAVs to be fitted with Orbital engines in the future.