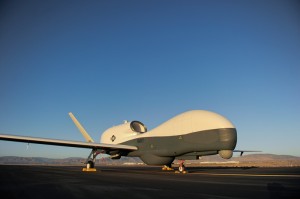 “Northrop Grumman is proud to provide our U.S. Navy customer with the MQ-4C Triton unmanned aircraft, a key element of the BAMS UAS program, representing the future of naval aviation and a strategic element of the U.S. Navy,” said Duke Dufresne, Northrop Grumman Aerospace Systems sector vice president and general manager for unmanned systems. “The BAMS UAS program will revolutionize persistent maritime intelligence, surveillance and reconnaissance. We are honored to serve the U.S. Navy and our nation’s allies in the quest to build and maintain a strong and cooperative global maritime domain.”

The Northrop Grumman BAMS UAS is a versatile maritime intelligence, surveillance and reconnaissance system to support a variety of missions while operating independently or in direct collaboration with fleet assets. When operational, BAMS will play a key role in providing commanders with a persistent, reliable picture of surface threats, covering vast areas of open ocean and littoral regions as the unmanned segment of the Navy’s Maritime Patrol Reconnaissance Force. 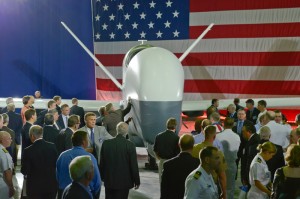 “Today is a significant day for the BAMS team,” said Rear Adm. Bill Shannon, program executive officer, unmanned aviation and strike weapons. “The work they have done and will continue to do is critical to the future of naval aviation. Their efforts will enable the BAMS system to provide the fleet a game-changing persistent maritime and littoral intelligence, surveillance and reconnaissance capability.”

Designated the MQ-4C, the U.S. Navy released the aircraft name today as “Triton,” keeping with the tradition of naming surveillance aircraft after Greek sea gods. Triton is the Greek messenger of the sea.

Currently, BAMS-D (demonstrator), a Block 10 RQ-4 equipped with maritime sensors, is being used by the U.S. Navy’s Fifth Fleet. BAMS-D provides a glimpse of the full persistent capabilities that the Triton’s 360-degree Multi-Function Active Sensor (MFAS) radar will bring to the fleet. The MFAS radar is produced by Northrop Grumman Electronic Systems.