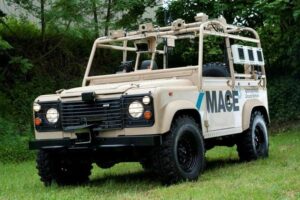 MIRA recently unveiled the latest application for its proprietary UGV control system at the week-long Eurosatory land security and defence industry show in Paris. The internationally recognised engineering consultancy had a strong presence at the show, with large numbers of attendees and official delegations visiting MIRA’s stand during the five day event.

The technology on show – MIRA’s incredibly versatile and mission-proven Autonomous Control Equipment (MACE) can be applied to almost any type of vehicle, but the new ‘Guardsman’ application showcased the system’s patrol and perimeter protection capability for the first time – enabling unmanned vehicle platforms to be operated remotely and autonomously at distances up to 20 kilometres away.

MACE technology is already in service with the British Army in Afghanistan, having been deployed in an IED detection role. However, as ‘Guardsman’ highlights, MACE’s functionality can be tailored to specific customer needs and its modularity affords a high degree of flexibility over both payload selection as well as the vehicle platform to which it’s applied.

Speaking at the show, MIRA’s senior global sales manager for defence systems, Rob Mohacsi said: “Uniquely MACE is the only UGV control system that has proven itself in theatre on vehicles weighing in excess of 4 tons. ‘Guardsman’ – which incorporates a surveillance capability alongside obstacle avoidance technology – ably demonstrates how readily it can be adapted for alternate roles.

“For nearly a decade MIRA has been at the forefront UGV systems, during which time our capabilities have expanded to incorporate every aspect of product development and deployment – from the design, specification and build of the UGV, to the integration of payload systems and in-the-field support.”

As the only international dedicated land security and defence event, Eurosatory attracts over 7,000 visitors from the armed forces and security agencies in over 100 countries every year – including Ministers of Defence and Secretaries of State, however the high levels of interest in MACE at the show proved that the technology’s unique proposition is also attractive to non-military personnel as well.

MIRA’s business development director Geoff Davis pointed to MACE’s wider operational applications: “We believe that in addition to MACE’s obvious military uses, the ability to safely extend perimeter awareness, through hidden and dead ground surveillance as well as 24/7 operation will appeal to customers including major infrastructure owners and operators.

“Flexibility of integration means MACE is an extremely cost effective UGV solution, particularly when you consider that MIRA can provide bespoke operator training as well as ongoing service support.”

MIRA’s UGV and defence engineering capabilities cover whole vehicle design, integration, testing and certification and the ability to act as a straightforward test-house or a prime contractor means that MIRA is able to respond to urgent operational requirements of varying size and complexity.

This flexibility, a customer-focused approach and unrivalled test facilities have already proven invaluable for a number of customers, including: UK MOD, BAe Systems, Lockheed Martin, General Dynamics, and NP Aerospace.

MIRA will also be showcasing its UGV and defence vehicle engineering capability at the DVD show in Bedfordshire on 21st June.