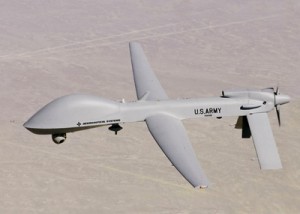 The Tactical Airborne Reconnaissance Simulator (TARS) is software that can run on a laptop.

“TARS is unique because it is highly transportable but still replicates the actions that a sensor operator would take inside of a ground control station [for UAVs] or manned aircraft,” said General Atomics spokeswoman Kimberly Kasitz.

“Its key feature is the ability to mission plan for a difficult target area, and then run that plan and see how the aircraft and sensors respond,” Kasitz said. “Feedback is seen immediately by how well the simulated SAR imagery covers the training target.”

Additionally, “the student can cross-cue from a point of interest on the ground identified by SAR to the EO/IR camera, which also displays simulated full-motion video,” he said. “TARS also can simulate GMTI and utilizes actual moving targets such as trucks and tanks.”

TARS was developed by General Atomics to meet the company’s internal training requirements (the Lynx radar is also made by General Atomics), but it also is suitable for military schoolhouses. Kasitz said there have been no orders yet for it, but there has been interest by both U.S. and foreign customers.