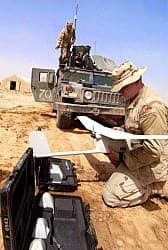 The Indian hi-tech industry is growing fast, but for particular equipment such as modern pocket UAVs, Delhi continues to launch billion dollar contests (it is to be noted that 10% of armament sales worldwide is directed to India).

The remote-controlled aircraft, or UAVs (Unmanned Aerial Vehicles) are the latest developments featured by all modern armies, and Delhi has decided to equip its own forces with mini-UAVs . The Indian Air Force and Navy have issued a tender for the supply of 100 mini-Uavs, and the selection decision is going to be made by the end of the year.

According to declarations, sources indicate that two companies have submitted their proposals, but it seems that other manufacturers may join the competition later.

Currently, the Israeli Bluebird and the US AeroVironment have offered their products, which are the MicroB and the Raven (or maybe the Puma) respectively.

This tender is part of the wider process to increase Indian hi-tech equipment. It is also to be noted that only yesterday India showed a demonstration of force by launching its already-tested Akash missiles.