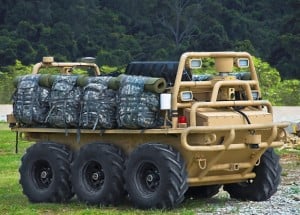 The original three-month Afghan tour of four Lockheed Martin Squad Mission Support System (SMSS) unmanned ground vehicles might be extended to eight months, if the unit using them has any say in the matter.

Don Nimblett, senior manager at Lockheed’s combat maneuver systems unit, said that the unit has requested an extension until the end of its tour in August. If granted, it would be the second mission extension that the system received this year.

As far as the operational assessment, Nimblett said that the unit — which he wouldn’t identify — has been using the SMSS primarily to help resupply smaller combat outposts and strongpoints, and on construction projects on its larger forward operating base. In one instance, the soldiers loaded the robot up with 100 sandbags, which the company estimates weighed 4,000 pounds (exceeding Lockheed’s recommended carrying weight of 1,200 pounds), and drove it up a 30-degree slope.

“We asked them not to do that again,” he quipped.

One unit used the SMSS to haul 10,000 pounds of supplies over the course of two days to a small combat outpost two kilometers away, Nimblett said, adding that it is regularly carrying 2,000-pound loads.

While initially planned as a squad-level asset, Nimblett said that the troops using it downrange are utilizing it more at the platoon level. The observation was reinforced when Lockheed brought the vehicle to the British Army for evaluation, and the Brits had the same idea.

Asked what’s next for the platform, Nimblett said that the company is considering adding another alternator to increase its power output, since one group of soldiers in Afghanistan has been trying to use it as a mobile operations center by loading it up with generators and batteries while out on missions. Lockheed is also considering adding a manipulator arm so it can load unload cargo itself.

Nimblett said that there has been some interest in the platform from several Middle Eastern countries, and that if the system gets good marks on this operational assessment he would expect it to become a program of record later this year.