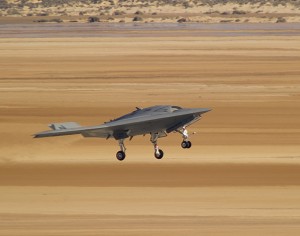 Less than a month after completing the first flight of the U.S. Navy’s X-47B UCAS-Demonstration aircraft, flight test engineers from Northrop Grumman Corporation (NYSE:NOC) and the Navy have successfully completed the aircraft’s second and third flights.

The flights, both conducted at Edwards Air Force Base, mark the beginning of a process called envelope expansion during which the test team will begin proving that the tailless aircraft can perform safely over a broad range of altitudes, air speeds and operating weights.

“Conducting two flights of a brand new type of aircraft within one week, and both within a month of first flight speaks not only to the robust design of the X-47B aircraft, but also to the dedication and engineering skills of the joint UCAS-D flight test team,” said Janis Pamiljans, vice president for the Navy UCAS program for Northrop Grumman’s Aerospace Systems sector. “These flights continue to add momentum to the team’s march toward demonstrating in 2013 that we can safely operate this tailless, low-observable-relevant air system on a Navy aircraft carrier.”

According to Phil Saunders, chief engineer for Northrop Grumman’s Navy UCAS program, envelope expansion is designed to fully characterize the aircraft’s flying qualities and prove that they match the system’s performance requirements and the test team’s predictions.

“Over the next few flights, we’ll continue to expand the envelope in terms of air speed, altitude and operating weight range,” he said. “By gradually ramping up the complexity of requirements, we will systematically prove that this air system can safely take off, fly and land in all anticipated flight environments.”

Northrop Grumman and the Navy expect to complete the planned 49-flight envelope expansion program at Edwards Air Force Base before moving the first X-47B to Naval Air Station Patuxent River, Md., later this year, he added.

One of the most important measures of performance, Saunders explains, is aircraft stability. The X-47B, which relies on high-speed computers to manage its flight control surfaces, must be able to adjust quickly and automatically to unpredictable environmental conditions such as air turbulence or cross winds. The recent test flights included a series of maneuvers designed to measure the aircraft’s ability to maintain a smooth, level flying state in the presence of such conditions.

The flight tests also confirmed that the X-47B’s flush mounted air data system – a nod to its low-observable-relevant design – is accurately sensing and communicating the aircraft’s air speed, a critical factor in takeoff and landing.

In addition, the flight tests gave the team the opportunity to validate the aircraft’s engine performance; its command and control system, and its ability to fly at a constant angle of attack and a constant rate of descent while on final approach to landing, simulating what it will have to do to make successful landing on an aircraft carrier.

The Navy awarded the UCAS-D prime contract to Northrop Grumman in August 2007. The six-year contract calls for the development of two X-47B fighter-sized aircraft. The program will demonstrate the first-ever carrier launches and recoveries by a tailless, unmanned aircraft. Autonomous aerial refueling will also be performed after carrier integration and at-sea trials.