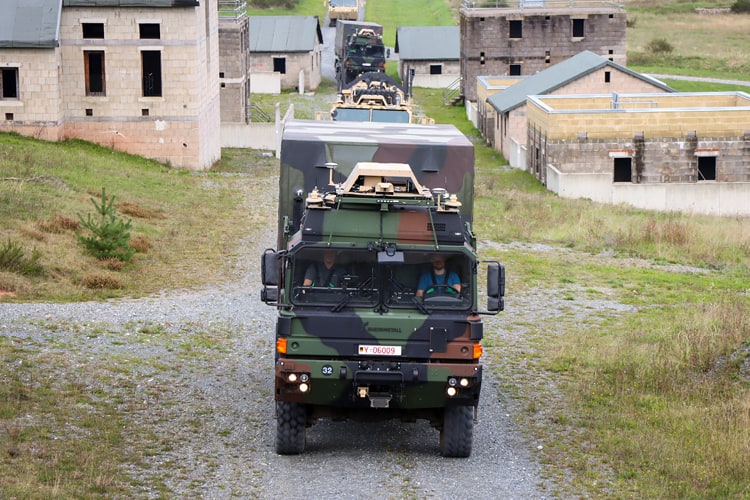 Under the test principles, the first vehicle is always driven manually, while the pursuit truck (or trucks) drives autonomously in its path. The pursuit vehicles are manned only by a backup driver, who can intervene in case of a malfunction. Primary functions, such as steering and accelerating, are controllable, as well as secondary functions such as engine starting, the lights, and differential locks.

The current project uses an autonomy kit (A-Kit) furnished by the German authorities, and originally provided by the US government under a project agreement. Rheinmetall’s role in the programme includes modifying the basic vehicles and integrating the autonomy function, together with commissioning and testing. The project has been recently demonstrated during two events.

As part of its Autonomous Ground Resupply (AGR) project, the US Army uses the same A-kits in its Oshkosh trucks that Rheinmetall uses for InterRoC, making mixed US-German convoys possible. This was tested in an operational demonstration (OPDEMO) at the US Army’s Grafenwöhr Training Area in Bavaria.

During the two-week event, a convoy consisting of five vehicles tested every conceivable operating mode of the system in multiple variants. In the process, 1,051 kilometres were driven autonomously. The entire convoy overcame a gradient of 40 percent, with the A-Kit operating the differential locks.

The vehicles were able to operate continuously for over 75 minutes without manual intervention. The maximum convoy length was 1,100 metres, and dynamic reconfiguration of the convoy proved possible with minimal idle time. These tests turned out to be a complete success for everyone involved, resulting in numerous valuable findings.

InterRoC vehicles also took part in the international European Land Robot Trial (ELROB) event in the presence of German government officials. ELROB is an open, multinational competition in the realms of robotics, sensors and autonomy, drawing participants from universities as well as civilian industry and the defence sector. Participants have to contend with various scenarios and overcome multiple challenges, conceived in close cooperation with military users. Completion of the tasks is evaluated by a team of experts.

Participating for the first time with the InterRoC research and technology project in the event’s Convoying category, Rheinmetall’s small team took second place, finishing behind the University of the Bundeswehr in Munich. The challenges strained the specified capabilities of the vehicles and A-Kit alike, but the creative Rheinmetall team, reinforced by colleagues from RMMV Austria, largely succeeded in overcoming these. In addition to the evaluated scenarios, Rheinmetall also carried out an autonomous driving presentation at the test site.