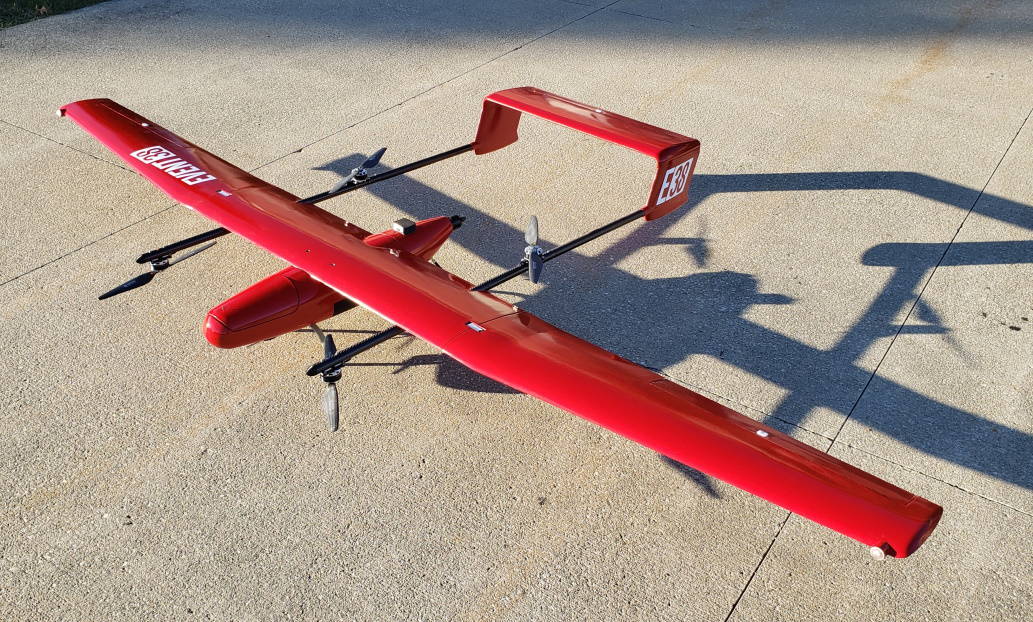 Event 38 Unmanned Systems has released the E400, a fixed-wing mapping drone with vertical take-off and landing (VTOL) functionality and a payload capacity of three pounds. Designed and manufactured in America, the UAV (unmanned aerial vehicle) features a flight time of ninety minutes, allowing operators to gather more data in a single mission.

The E400 incorporates VTOL capabilities as well as enhanced stability at altitude and in windy conditions, making it more durable and versatile than a multirotor drone. The aircraft can take off or land anywhere at the touch of a button, eliminating the need for specialty launch or recovery equipment.

Another user-friendly feature of the E400 is the plane’s hot-swap payload bay. The E400’s payload can be changed in under a minute without specialty tools or skills, minimizing down time between missions. Customers can choose from a variety of specialty cameras and other advanced sensors, including high-resolution aerial photogrammetry, thermal and multispectral imagery, LiDAR, and live video streaming. The E400’s payload pay has an open interface, so customers can integrate virtually any camera or sensor with Event 38’s open-source autopilot software.

Event 38 began exploring VTOL functionality for fixed-wing drones in 2019 during a partnership with the Air Force’s Rapid Sustainment Office (RSO). The team ran trials with the Air National Guard on a military-grade, carbon fiber, fixed-wing VTOL aircraft, which is now commercially available as the E400.

Jeff Taylor, founder and CEO of Event 38, commented: “We’ve been making fixed-wing drones for over a decade, but the E400 is our first fixed-wing drone with VTOL capabilities. We’re extremely proud to offer this feature. At Event 38, we’re always looking for ways to make our drones more useful and accessible. Adding VTOL functionality improved the user friendliness of the E400 by leaps and bounds.”

“The E400 is the only drone of its kind that’s made on American soil. This drone is the culmination of everything we’ve learned over the past ten years and the advancements we made in partnership with the military, and we’re incredibly proud to bring the E400 to market.”