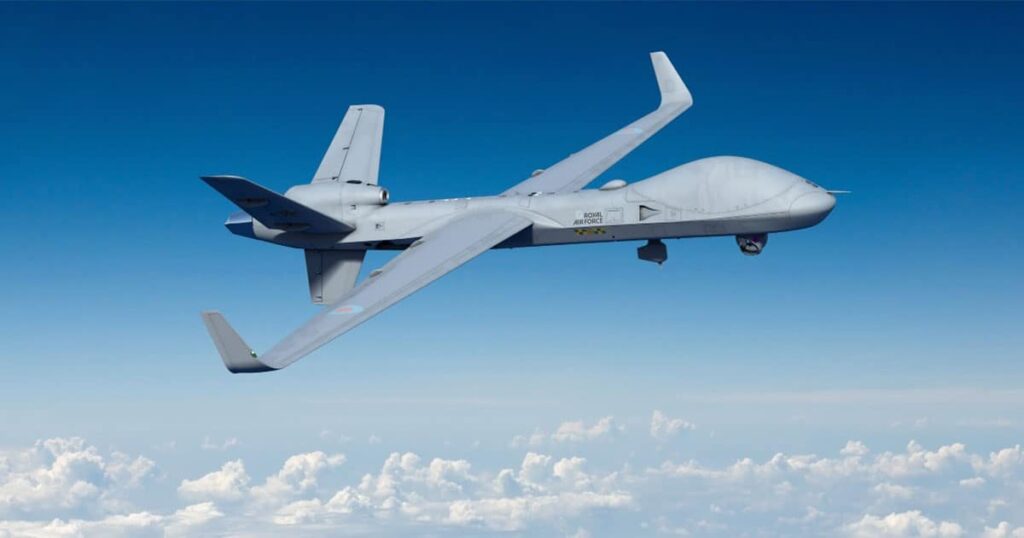 The Protector RG Mk1 is based on GA-ASI’s MQ-9B SkyGuardian, and includes X-band satellite communications (SATCOM) and support for UK weapon systems, as well as the aircraft’s onboard sensors such as its electro-optical sensor ball and Lynx Multi-mode Radar. The first Protector aircraft has been completed, and is currently supporting system testing as part of a combined UK MoD, U.S. Air Force and GA-ASI test team. Known as UK1, it will be delivered to the MoD later this year, but will remain in the U.S. to complete the Royal Air Force’s test and evaluation program before moving to its UK home base in 2022.

The partnership between GA-ASI and the UK MoD brings significant benefits to UK aerospace and defense industries. One example is GKN Aerospace, which is manufacturing the advanced composite V-tails for the MQ-9B at its centre of excellence in Cowes, the Isle of Wight.

The development of the MQ-9B platform began as a company-funded program to deliver an unmanned aircraft that meets the stringent NATO STANAG-4671 and UK DEFSTAN 00-970 aircraft system airworthiness requirements. These provide the basis for type certification by NATO member-state military airworthiness authorities. The MQ-9B is designed to accommodate the GA-ASI-developed Detect and Avoid System (DAAS), which helps the aircraft integrate with the normal flow of aviation traffic and keeps operators in contact with air traffic control. The aircraft is built for adverse weather performance with lightning protection, damage tolerance, and a de-icing system. MQ-9B features rapid integration of new payloads with nine hard points. The aircraft can self-deploy using SATCOM-enabled Automatic Takeoff and Landing, which eliminates forward-based launch-and-recovery equipment and personnel.

Jeremy Quin, UK Minister for Defense Procurement, commented: “Our fleet of 16 Protector aircraft equipped with ultra-modern technology will provide the Royal Air Force (RAF) with a vast global reach allowing us to monitor and protect the battlespace for hours on end. The Protector programme involves industry across the UK with vital parts of the aircraft manufactured on the Isle of Wight, supporting highly-skilled jobs for years to come.”

Linden Blue, CEO at GA-ASI, said: “This commitment for 13 additional unmanned aircraft confirms the long-term confidence of the UK MoD and the Royal Air Force in the MQ-9B system and the Protector program. The MQ-9B system will bring unparalleled reconnaissance capability to the RAF and help to ensure the security of the UK and its allies.”

Air Commodore Richard Barrow, Senior Responsible Owner for the RAF Protector Programme, stated: “The contract for the additional 13 Protector aircraft, taking the total to 16, is a major milestone for the UK. When Protector enters service in 2024, UK Defence will take an enormous jump forward in capability, giving us the ability to operate globally with this cutting edge, highly adaptable platform.”