Rotary Diesel Engine to be Adapted for UAS 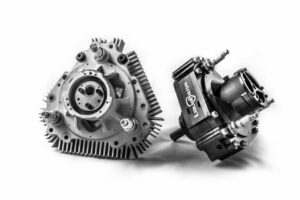 LiquidPiston has been awarded a contract from the United States Air Force to adapt its X-Engine technology for use in unmanned aerial systems (UAS) as well as “orbs” – urban air mobility (UAM) vehicles designed to carry people and cargo around. The X-Engine is a next-generation rotary diesel engine and is being evaluated as an enabling technology to power a potential hybrid-electric propulsion system. Current battery technology limits the range of aerial vehicles, and the X-Engine’s conversion of the energy contained in jet fuels could enable the Air Force’s concepts to become reality.

The contract is in support of the USAF’s AFWERX Agility Prime program, which seeks to leverage commercial electric vertical takeoff and landing (eVTOL) and other transformative vertical flight vehicles for government missions in a way that accelerates the emerging commercial market.

A major issue facing all-electric aerial and ground vehicles is that modern battery technology does not offer sufficient energy density, meaning the range of these vehicles will be limited. For military orb vehicles and commercial urban air mobility to be operationally viable in a range of use cases, a stronger, lightweight power and energy source is needed to significantly extend flight times.

The X-Engine takes a hybrid approach to this problem. Because fuel is up to 50 times more energy-dense than even modern batteries, the X-Engine, coupled with a generator, can be configured to charge the battery and keep it charged during flight, significantly extending the range of an electric propulsion system. Alternatively, the X-Engine can be configured in parallel with an electric drive, using the engine directly to produce thrust or lift. With the X-Engine’s hybrid approach, the Air Force can leverage the energy density of fuel, while still getting the benefits of an electric drive propulsion system.

LiquidPiston’s X-Engine is a lightweight rotary engine capable of running on JP-8, jet fuel, diesel and other heavy fuels. The modular design of the engine coupled with the lightweight high-speed alternators enables technology to easily scale in size and increase the range of eVTOL UAS and UAM vehicles. The X-Engine is 30% more fuel-efficient than a diesel engine and up to 5-10x smaller and lighter. Compared to a small turbine, the X-engine is up to 2-4x more fuel-efficient while fitting a comparable envelope and weight.

Alec Shkolnik, CEO and co-founder of LiquidPiston, commented: “Our work with the Air Force demonstrates the versatility and utility of our X-Engine across the Department of Defense including our ongoing work with the US Army. Today’s solutions for power and energy are held back by a lack of technological innovation; gasoline engines are inefficient, diesel engines are big and heavy, and while the world wants to go electric, batteries lack significantly compared to the energy density of fuel. The X-Engine solves these challenges, and with this contract, we look forward to showcasing the value a hybrid-electric configuration can bring to unmanned flight.”