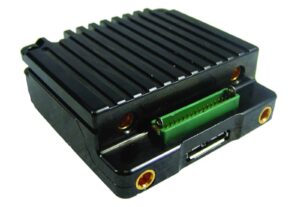 The MeshUltra Tactical COFDM waveform was designed from the ground up for optimal performance in heavy multipath and high-interference environments. It employs over 800 carriers in contrast to the 54 carriers of Wi-Fi, allowing for a lower symbol rate on each carrier and therefore much better resistance to long-range multipath reflections.

The MeshUltra waveform is MIMO (multiple input multiple output)-capable and highly spectrally efficient, particularly when compared with tactical radios that utilize constant amplitude modulations. It provides over 90Mbps in 20MHz channels and up to 5.6 Mbps in a narrow 1.25MHz channel, allowing much higher PLI update rates, low latency voice and potentially even video.

Most MANET Mesh radios employ a “contention based” channel access mechanism called CSMA (Carrier Sensed Multiple Access) in which radios with data to wait until they can see a clear channel before transmitting. CSMA networks are subject to self-interference due to “contention.” This can lead to multiple retries, thus significantly reducing real world network capacity, particularly in a large network. It also leads to very variable latency. DTC MeshUltra utilizes a token-based managed channel access mechanism in which only a radio holding the channel access token can transmit. This completely removes self-interference and allows DTC networks to operate extremely efficiency, and with low and predictable latency even at very high utilization.

Juan A. Navarro, CEO of DTC, commented: “”We value our partnership with the Army and find it rewarding to see the performance DTC has achieved.”