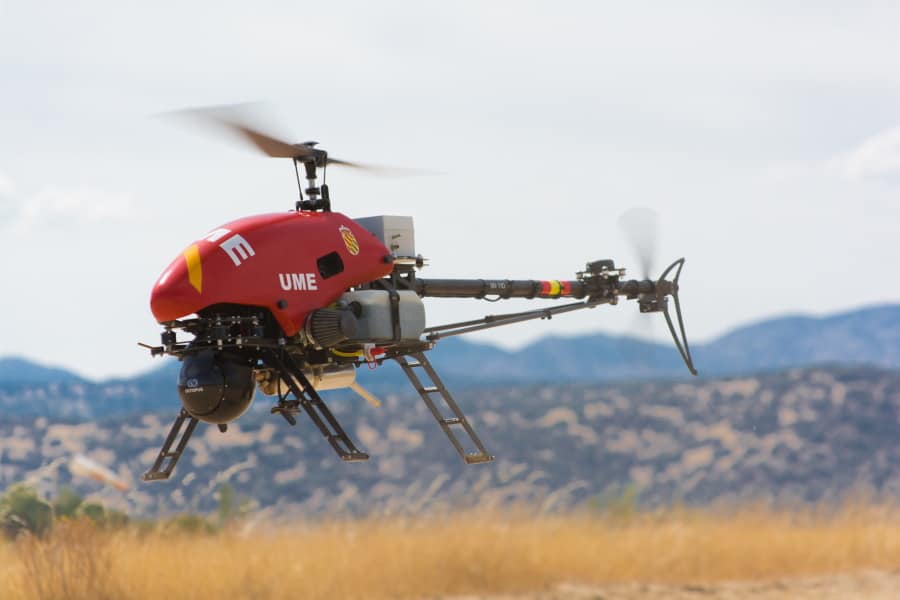 Alpha Unmanned Systems’ Alpha 800 helicopter UAV (unmanned aerial vehicle) is being used to support the ResponDrone project, providing situational awareness for first responders. The ResponDrone project is an initiative co-funded by the European Union (EU) and Korean government that is dedicated to providing critical information and communication services in emergency situations.

During fires, floods and other disaster situations, lack of line of sight and deficiencies in communications can make it difficult for first responders to plan and execute missions. During these situations time is often critical, adding a further dimension of difficulty for emergency response teams.

Rapid data collection is thus vital during the early stages of a disaster. UAVs, especially rotary-wing platforms, are becoming a leading tool for first responders, providing an initial means of communication as well as gathering data for status reports and situational analysis. Systems like ResponDrone, with several working concurrently, can amass information about possible access routes and victim locations, and provide precision mapping to designate evacuation and supply routes, take-off and landing areas. This information will facilitate faster and easier on-scene arrival capabilities.

The use of drones also allow teams to make decisions in real time and attempt to anticipate potential situational changes. Pilots can work from a safe position and provide rapid feedback to decision-makers, who can act quickly on the data collected.

The Alpha 800 UAV is a rotary-wing aircraft capable of flying at low speed and low altitude and requiring only a 9m2 area for its VTOL (vertical take-off and landing) operation. It can operate in maritime environments and in temperature ranges of -10ºC to +50ºC, making it a flexible solution than can be deployed under a wide range of conditions. With a 3kg payload capacity, it can be equipped with thermal, night vision, LiDAR, IR or mobile phone seeker sensors.

Other particular features of the Alpha 800 that make it highly suited to emergency and disaster response applications include:

Alpha Security and Defence is a division of Alpha Unmanned Systems.