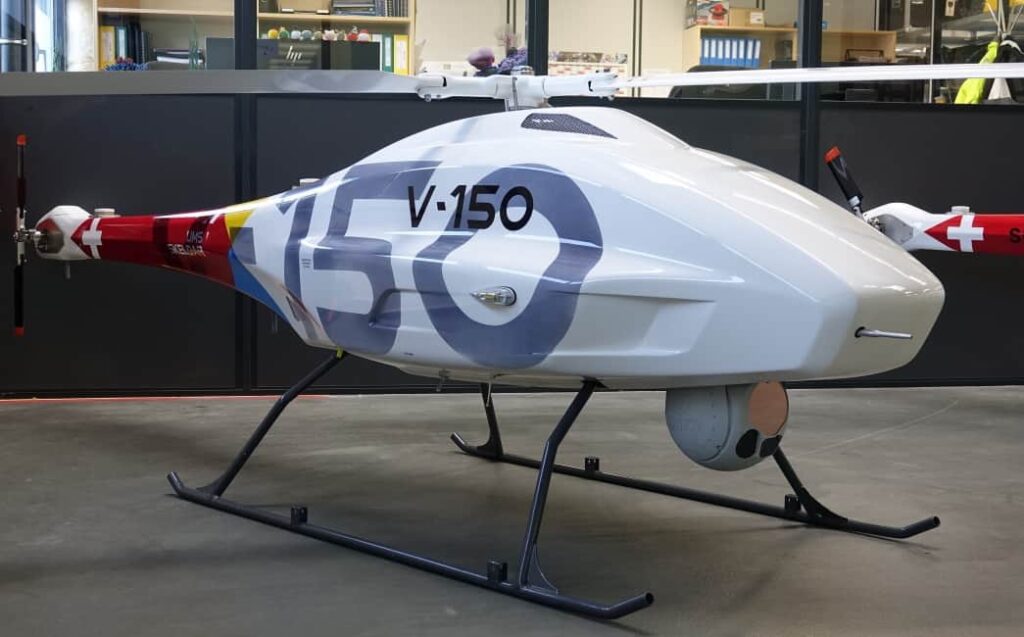 The ITAR-free unmanned aircraft has been designed with two payload bays, a main bay with a capacity of 30 kg and a nose bay that carries up to 12 kg. With a 12kg payload the aircraft is capable of a flight endurance of 2.5 hours, and planned modifications currently in the works will extend this to 4 hours. The V-150 is powered by a heavy-fuel turbine engine propulsion system, and the aircraft’s modular design simplifies maintenance resulting in minimum downtime during missions.

For maritime missions the SKELDAR V-150 can be equipped with a powerful Electro Optical/Infrared (EO/IR) sensor and a variety of small tactical synthetic aperture radars (SAR) that deliver real-time intelligence in all weather conditions, day and night. The aircraft features strip map, spotlight and wide area operating modes that enable operators to engage in high-level maritime surveillance and moving target detection.

For land-based missions, a combination of EO/IR and Signals Intelligence (SIGINT) sensors allows the aircraft to deliver critical mission intelligence. The SIGINT payload locates targets and forwards their location into the integrated mission management system while the EO/IR systems provide the imagery. Additionally, the V-150 can be equipped with a range of wide area motion imagery sensors to provide a detailed intelligence, surveillance and reconnaissance (ISR) picture of a large footprint in real-time, supporting multiple agencies in their daily operations.

David Willems, VP Business Development and Strategy for UMS SKELDAR, commented: “The new V-150 is the perfect partner for our flagship SKELDAR V-200. With target sectors including defence forces, coastguards, border patrol agencies, blue light forces, fire departments and drug interdiction and trafficking agencies to name a few, the V-150 has been developed as an easy to use, simple to maintain, UAV that can assist organisations with a wide range of smaller critical activities that ordinarily would entail manned crews taking on at an increased cost.”