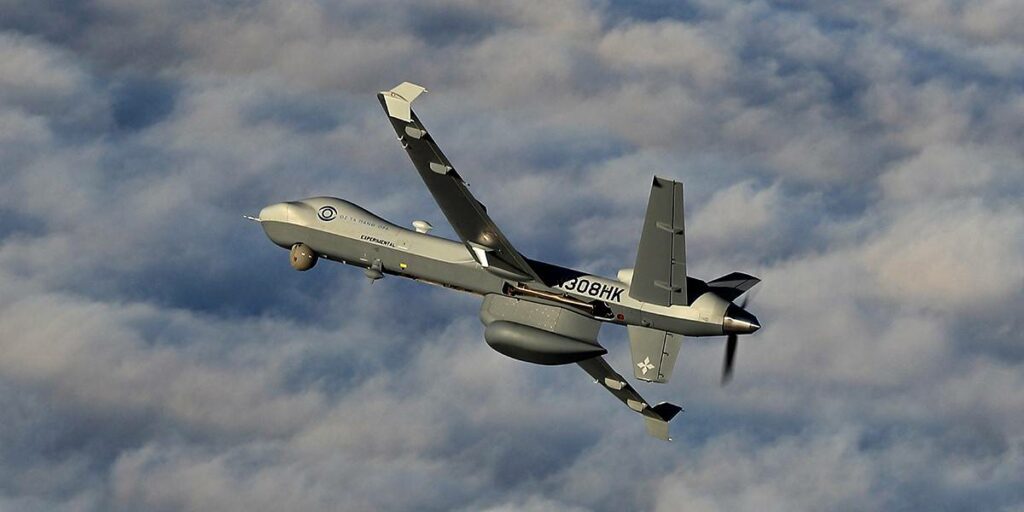 General Atomics Aeronautical Systems, Inc. (GA-ASI) has announced that a series of flight demonstrations with the company’s MQ-9 Guardian Remotely Piloted Aircraft System (RPAS), performed out of Larissa Air Base in Greece for an audience of European military and civilian representatives, has successfully concluded.

The demonstrations were intended to highlight the maritime surveillance capabilities of the MQ-9 UAS (unmanned aerial system), as well as the GA-ASI-developed Detect and Avoid (DAA) system for traffic-deconfliction in civil airspace. The flights were sponsored by the Hellenic Air Force (HAF) and the Hellenic Coast Guard (HCG).

GA-ASI partnered with satellite communications (SATCOM) operator SES for the demonstrations. SES has over 70 satellites in Geostationary Orbit (GEO) and Medium Earth Orbit (MEO), and provided the GEO satellite connectivity that enabled the MQ-9 to operate securely with a high capacity datalink, enabling real-time transmission of sensor data from the UAV, and extending its effective operational range far beyond that of “line-of-sight” datalinks.

GA-ASI’s DAA system, which enables the unmanned aircraft to operate safely in civil airspace, is based around an air-to-air radar integrated with Traffic Alert and Collision Avoidance System (TCAS II) and Automatic Dependent Surveillance-Broadcast (ADS-B), and can also detect air traffic that is not actively transmitting its position.

In addition to the DAA system, GA-ASI also demonstrated an onboard multi-mode, maritime surface-search radar, and a High-Definition/Full-Motion Video Optical and Infrared sensor. These integrated sensor payloads provide real-time 360-degree detection and identification of large and small surface vessels, in all weather conditions. The Raytheon SeaVue surface-search radar provided continuous tracking of maritime targets and correlation of AIS transmitters with radar detections, and features an Inverse Synthetic Aperture Radar (ISAR) mode that allows classification of vessels which are beyond optical sensor range.

GA-ASI RPAS are operated by the U.S. Air Force, U.S. Army, U.S. Marine Corps, U.S. Department of Homeland Security and NASA. Internationally, they also support the Italian Air Force, the UK Royal Air Force, the French Air Force, and the Spanish Air Force. The Ministry of Defence for the Netherlands has selected MQ-9 for the Royal Netherlands Air Force, and the Government of Belgium has approved Belgian Defense to negotiate the acquisition of GA-ASI’s MQ-9B. The Australian Government has recently announced selection of MQ-9B for the Australian Defence Force under Project Air 7003.

Linden Blue, CEO of GA-ASI, commented: “We were honored to have the HAF’s and the HCG’s support for these flight demonstrations with our MQ-9. The MQ-9 RPAS is already a strategic asset for NATO countries, providing mission persistence and interoperability between allies. We showcased MQ-9s maritime surveillance and the civil airspace integration capabilities for our European customers.”

An official spokesperson from the HAF stated: “The advanced capabilities of these aircraft are striking. Through the 10 days of demonstrations, the country of Greece has seen the value of MQ-9’s for maritime patrol and EEZ monitoring, border surveillance, support for search and rescue efforts, and over-watch of forest fire response efforts.”

Nicole Robinson, Senior Vice President, Global Government at SES Networks, said: “With our global satellite fleet, SES has been supporting the critical needs of GA-ASI and their government customers who have operated these aircraft for close to two decades. We were proud to support this demonstration effort for the Hellenic Air Force as part of our long-standing relationship with General Atomics.”