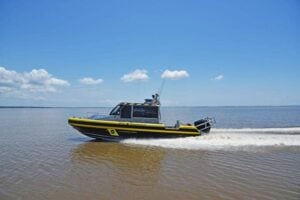 Highly versatile and customisable, around 400 Metal Shark 29 Defiant vessels are already in service worldwide, however Metal Shark’s ‘Stock Boats Program’ has led to the development of a standardized configuration with reduced lead times. This means that the autonomous vessel is now readily available for acquisition by government and commercial operators.

“In conjunction with Sea Machines we have developed a turn-key autonomous production model to be kept in our regular stock rotation and available for near-immediate delivery.” says Metal Shark CEO Chris Allard, “many people still think of autonomous technology in future terms, it has already arrived. With Sea Machines we’re bringing autonomy to market in a ready form that operators can buy today and run tomorrow.”