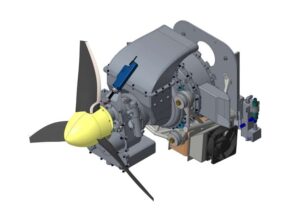 UAV Turbines, Inc. (UAVT), a developer of microturbine technology, has announced the introduction of its Monarch RP family of microturbine engines, which will provide defense and commercial partners with reliable, quiet, and powerful propulsion systems. Designed for Group 3 and 4 Unmanned Aerial Vehicles (UAVs), the Monarch engines can run on heavy fuel of varying qualities. The Monarch RP has passed all critical tests in the cell, working through its operating cycle repeatedly, and for extended times. As a result, UAVT is now working with a commercial airframe partner to conduct ground testing.

“After several years of intense effort, our talented team of engineers has developed a complete, turnkey microturbine propulsion system for Group 3 and 4 UAVs that is unique in both utility and function,” said Kirk Warshaw, CEO of UAV Turbines. “Throughout the design process, we focused on creating the world’s first reliable, lightweight, high-performance microturbine engine for small aircraft that runs on heavy fuel. As we have matured the design, we now recognize that a microturbine in this category has limitless possibilities across the propulsion spectrum.”

“The Monarch RP propulsion systems changes the game for unmanned flight,” said William T. “Tim” Crosby, MG (R) Chairman of UAVT’s Board of Advisors. “The U.S. Military is in critical need of a reliable heavy fuel engine that ensures our troops consistently have the support of their UAVs when they need them. The successful evolution and testing of the Monarch RP propulsion systems proves that reliability, added safety, and efficiency is possible and will soon be available to the warfighter in a variety of platforms.”