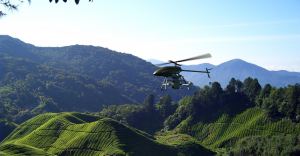 Phoenix Aerial Systems, a manufacturer of LiDAR mobile mapping systems, has launched the world’s first survey-grade LiDAR system for small-unmanned aircraft. The innovative system called the “Phoenix AL2” was designed to meet the needs of an emerging UAV surveying market in terms of precision, cross-platform flexibility and weight optimization.

Measuring only 14 x 22 x 18 cm and weighing less than 13lbs (5.8 kg), the Phoenix AL2 is one of the lightest survey-grade LiDAR mapping systems on the market. Processing over 700,000 points per second with a 360° field of view and 100 meter range, the Velodyne LiDAR sensor captures enough data to allow the vehicle to move at speeds up to 60 mph (100 km/h) and maintain incredible point-cloud density.

Applications include, but are not limited to: Topography and Mining, Agricultural and Forestry, Flood Zone Mapping, Power Line and Pipe Line Inspection, and the Academic Markets.

“What makes the AL2 system truly unique is the software. During the entire flight, the pilot can visualize the growing point-cloud on a computer screen in real time. With this data, the pilot can locate areas yet to be scanned and quickly alter the UAV’s course!” said Grayson Omans, Phoenix Aerial’s Chief Executive Officer.

On July 22nd and 24th, Phoenix Aerial will have a live 2-hour online demonstration of the AL2 mapping system scanning the streets of Los Angeles. Users can view the real time point cloud anywhere around the globe.