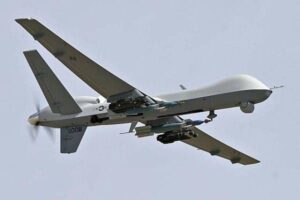 General Atomics Aeronautical Systems, Inc. (GA ASI), a leading manufacturer of Remotely Piloted Aircraft (RPA) systems, radars, and electro-optic and related mission systems solutions, today announced the successful second endurance flight of its Predator® B Extended Range (ER) RPA, an advanced derivative of the mission-proven Predator B RPA that has accumulated over 800,000 flight hours since 2001. The flight launched on June 17 and landed on June 18.

“This flight was a significant milestone for Predator B ER in that it closes out its Phase 1 flight test period,” said Frank W. Pace, president, Aircraft Systems, GA-ASI. “The entire RPA system was successfully tested from start to finish, including flying a real-world representative mission with significant loiter time, and then returning to base.”

During the flight, Predator B ER demonstrated its ability to carry an external fuel tank on each wing and showed the utility of a new fuel management system which ensures fuel and thermal balance amongst all fuel sources, including the external tanks, the wing, and the fuselage. Additionally, the aircraft demonstrated its Alcohol Water Injection (AWI) system, which provides tremendous value by shortening the required runway takeoff length, especially at higher gross takeoff weights, higher altitude take-offs, and on hot days. AWI also improves climb out performance and fuel efficiency.
Additional testing will be conducted into 2015 to validate other mission profiles and aircraft configurations.