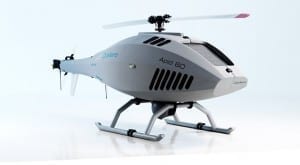 First North-listed CybAero, which develops and markets unmanned helicopters, is switching to a new engine and engine supplier for its Apid 60 VTOL UAV.

CybAero has been evaluating several engines and engine suppliers for some time to improve the Apid 60’s performance and reliability. The British company, Rotron, and one of their Wankel engines (often referred to as rotary engines) were chosen.

“The reason we ultimately chose Rotron is because of their great technological capabilities and innovativeness, and because their Wankel engine meets our requirements and specifications in full,” says Rolf Schytt, CybAero’s chief operating officer. “The engine is available for both gasoline and heavy fuel, which is well-suited for our current and future customers,” Schytt continues.

“We are extremely flattered and honored that CybAero chose us as their supplier,” says Jim Edmonson, Rotron’s CEO. We will do our very best to meet CybAero’s needs, especially now that their order book is so full.

CybAero recently signed a contract with Aviation Industry Corporation of China (AVIC) for the delivery of at least 70 systems in the next 8 years. The contract has a value of approximately SEK 700–800 million. In addition, CybAero has already received an order from ChinaCustoms for the delivery of a couple of systems. These systems will be operated from ships.