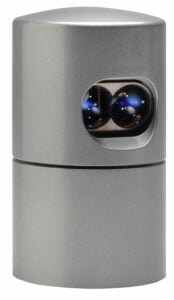 Velodyne’s LiDAR division, the leading manufacturer and supplier of real-time LiDAR sensor technology used in a variety of commercial applications, today announced a quantity order for HDL-32E sensors, for a mobile mapping application that leverages the advantages of “Calibrated Reflectivies.”

The Calibrated Reflectivity data measured with the company’s 360° HDL-32E LiDAR sensors helps with localizing license plates, street signs and lane markings within 2D pictures and surround video data for classification/cataloging during asset management and blurring of privacy information. Knowing the location of the street signs and license plates in the 2D video data allows for automation of the post-processing, resulting in shorter process times and significant cost savings.

As a result of the enhanced sensor technology, Velodyne reported that the LiDAR division has received a significant follow-up order for its popular HDL-32E multi-channel LiDAR sensor. The technology will be deployed worldwide in a complex mobile mapping application using hundreds of Velodyne sensors.

“This is a major win, building on our successful relationship with a company that already operates a worldwide fleet of mobile mapping vehicles,” said Wolfgang Juchmann, Director of Sales and Marketing, Velodyne LiDAR.

Among other notable additional features: the HDL’s web server GUI, combined with the Internet-based script language (“.json”), that enables users to routinely monitor and control performance parameters during operation without wasting valuable collection time. The sensor’s compact footprint – together with its acquisition rate of ~700,000 data points per second — makes it a key component of the map provider’s powerful collection system. The unit is small enough to be shipped anywhere in the world using regular airfreight carriers. The 32 angled laser beams enable objects to be measured from different viewpoints, minimizing shadows and capturing three sides of a building in a single pass.

When mounting the lightweight HDL-32E (~1kg) on an unmanned aerial vehicle (UAV), the multi-angle approach can be the enabling factor to see objects that would otherwise be obscured by overhanging roofs or large-size covers.