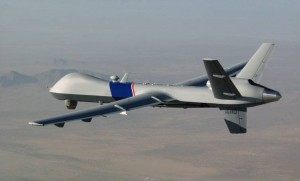 This second demonstration expanded on the success of previous efforts between the Marine Corps, Northrop Grumman Corporation, and GA-ASI. The objective was to integrate a company-owned Predator B RPA into a Marine Aviation Command and Control (C2) network, enabling control of the aircraft’s Electronic Warfare (EW) payload and other assets to deliver effects across the Electro-magnetic Spectrum (EMS). This C2 capability was exercised from the Cyber/Electronic Warfare Coordination Cell located at MCAS Yuma and addressed simulated targets located hundreds of miles north at Naval Air Weapons Station China Lake. The Marine Corps is currently analyzing the jamming data in an effort to quantify the EW effectiveness better and hopes to have the official results available soon.