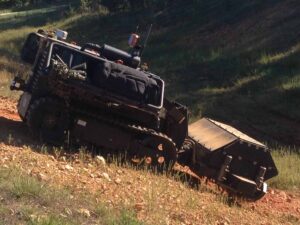 Mesa Technologies, Inc., a low cost leader in the Unmanned Ground Robotics (UGV) industry, has announced that the ACER robotic platform completed numerous safety testing protocols through the Army Test and Evaluation Center (ATEC) that can be used to support a safety release to allow further CONUS evaluations potentially including the Warfighter. The testing was sponsored by both the Army Capabilities Integration Center (ARCIC) and the Joint Improvised Explosive Device Defeat Organization (JIEDDO) based on results observed in the JIEDDO 2012 Robotics Challenge.

According to Tim Cutshaw, Vice President, “The completion of ATEC testing is a significant accomplishment for our mid-sized platform. The ACER is one of the few UGV’s to complete “follow me” safety testing. The follow-me behavior is significant because it allows the Warfighter to focus on the mission and not driving the vehicle.” In addition to IED defeat missions, the ACER also offers multi-mission capabilities for lightening the Warfighters’ load, logistics, and many engineer missions. Current development includes integrating an IED detection device with automated defeat system to give the ACER fast advance speeds with the surety of defeat.