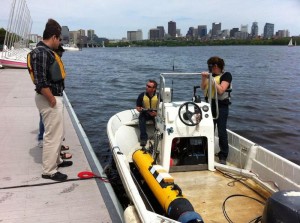 The software was demonstrated on Bluefin AUVs

Bluefin Robotics, a leading provider of Autonomous Underwater Vehicles (AUVs), and the Laboratory of Autonomous Marine Sensing Systems (LAMSS) at the Massachusetts Institute of Technology (MIT) announced that the team has demonstrated the MOOS-IvP Payload Autonomy, or Backseat Driver, concept running on a field exchangeable GumstixTM computer on two Bluefin AUVs, a Bluefin-9 and Bluefin-21. The MOOS-IvP autonomy system is a set of open-source C++ modules that autonomously adapt the AUV to environmental sensory input. The recent demonstrations prove that the software can be easily and rapidly applied to multiple vehicles to support the development, testing and fielding of new behaviors needed to advance AUV applications and even enable rapid mission configuration changes in the field.

“We see this ‘plug-and-play autonomy’ capability as a critical enabler for efficient field deployment of the payload autonomy operational paradigm we have been developing over the last decade,” said Professor Henrik Schmidt, Director of the LAMSS at MIT. “It allows us to test the mission configuration by connecting the payload computer carrying the autonomy software to a laptop computer with a simulation environment representing realistic platform dynamics and sensory input. The autonomy software is then installed on a small platform such as the Bluefin-9 for field-testing of the autonomy at low cost before it is finally installed on the operational platform such as the Bluefin-21. Thanks to Bluefin’s standard payload interface, we are able to experiment with new behaviors without posing a risk to the vehicle, and reduced development time and cost.”

A major enabler for this incremental testing and demonstration of the MIT MOOS-IvP autonomy software is its recent integration on a very small plug-and-play module known as a Gumstix computer. Behaviors and mission plans are configured and simulated in the lab, and then uploaded to this MIT autonomy module. While onsite at the Charles River in Cambridge, an operator simply removed Bluefin’s standard Removable Data Storage Module (RDSM) and replaced it with the autonomy module. The vehicle was deployed from the shore and mission commands were sent from an iPhone to the topside computer, over the acoustic modem and to the vehicle.

“Under the payload autonomy operational paradigm MOOS-IvP serves as unified communication, command, and control infrastructure for managing multiple vehicles from one set of topside equipment,” explained Prof. Schmidt. “A single human operating several AUVs has the potential of significantly reducing the operational cost of undersea sensing networks, while multiplying AUV effectiveness for both defense and oceanographic applications such as those envisioned under the NSF Ocean Observatory Initiative.”

When interfacing with the Bluefin-21, the MIT MOOS-IvP suite was installed on a PC/104 computer inside the system’s dry main electronics housing. Many of the same behaviors tested on the smaller Bluefin-9 system were then demonstrated at-sea on the Bluefin-21. The same operational paradigm was applied and the vehicle responded to speed / heading / depth commands from MOOS-IvP. All critical vehicle safeties set by the Bluefin system were observed allowing MIT to demonstrate behaviors without risking the system to mission configuration error. Should the mission violate vehicle safety parameters the vehicle would abort and a revised mission could be uploaded.

Bluefin and MIT will be providing a demonstration of the MOOS-IvP on the Bluefin-9 in the Charles River during the MOOS-DAWG’13 Annual Meeting on July 29th prior to the kick off Bluefin barbeque at the MIT Sailing Pavilion. For more information on the event, please visit: www.moos-dawg.org.

Bluefin AUVs have been a testbed platform for MOOS-IvP development since 2005 when the Generic Ocean Array Technology Sonar (GOATS) program took place in La Spezia, Italy.

This project is sponsored by the Office of Naval Research (ONR) with supplemental support by Bluefin Robotics and Battelle. Development of MOOS-IvP is sponsored by ONR Code 311. The adaptive and collaborative environmental acoustic research performed in LAMSS is funded by ONR code 322OA.