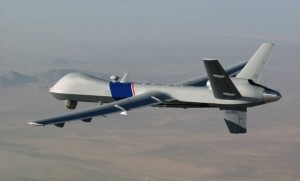 The Predator B UAV

“Detecting airborne vehicles not equipped with transponders will be key to safely integrating RPA into the National Airspace System [NAS],” said Frank W. Pace, president, Aircraft Systems Group, GA-ASI. “The prototype Due Regard Radar is a critical component of GA-ASI’s Sense and Avoid system, facilitating collision avoidance onboard the aircraft and allowing the pilot to separate the RPA from other air traffic in cooperation with Air Traffic Control [ATC].”

Installed on a company-owned Predator B aircraft and controlled from the RPA’s Ground Control Station (GCS), the prototype DRR flight test occurred on December 10, 2012 at GA-ASI’s Gray Butte Flight Operations Facility in Palmdale, Calif. The purpose of the test was to confirm the ability to integrate DRR onto a Predator B, as well as its ability to detect and track intruder aircraft.

During the flight test, a company-owned King Air aircraft flew in the role of the non-cooperative “intruder” aircraft. DRR simultaneously detected and tracked the “intruder,” as well as multiple other aircraft in the vicinity. Using Actively Electronically Scanned Array (AESA) technology allows the radar to track multiple targets while continuously scanning the Field of Regard (FOR) for potential new threats. All the aircraft tracks were downlinked to the GCS via satellite communications and displayed real-time on an engineering Graphical User Interface (GUI). The tracks were correlated and validated with a radar feed from ATC.

“GA-ASI is excited to be advancing Sense and Avoid technology, not only in developing new systems, but also in helping define standards and working with our industry partners,” added Linden Blue, president, Reconnaissance Systems Group, GA-ASI.

GA-ASI continues to adapt the prototype DRR into a mature solution that can meet the full FOR and accuracy requirements envisioned for flights in the NAS. Flight tests will continue on both RPA and manned aircraft during 2013.

In related developments last year, GA-ASI successfully demonstrated an Automatic Dependent Surveillance-Broadcast (ADS-B)-based surveillance system aboard a U.S. Department of Homeland Security/Customs and Border Protection Guardian (Predator B) RPA. Both ADS-B and DRR are envisioned to be sensors in the first airborne SAA architecture for Predator B.