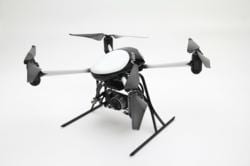 Emergency responders now have a new remotely piloted unmanned helicopter to use when inspecting dangerous or difficult to reach areas. The Draganflyer aircraft streams wireless digital video down to the operator and displays it on a handheld screen.

The Draganflyer X6-ES or X4-ES is remotely piloted to the desired location where it is locked in GPS position hold, automatically maintaining position and freeing the operator to view the video displayed on the LCD screen. During flight the operator has the option to record video to the GCS, shoot still images, or network the GCS to other networks and stream real-time video to other devices.

Used with the thermal FLIR (Forward Looking InfraRed) camera payload, emergency services employ this unmanned aircraft to view hot spots that would normally be invisible to the naked eye. The Draganflyer can be flown into areas for a closer look, removing the need to place anyone in harms way, decreasing risk and increasing safety.

Draganflyer aircraft are the first North American federally approved commercially manufactured UAVs (Unmanned Aerial Vehicles) legal for use by emergency services in North America and have the largest public safety installed base in North America. Available with custom black, red, or yellow bodies, the Draganflyer X6-ES and X4-ES display agency shield and name (Police, Sheriff, or Fire and Rescue).