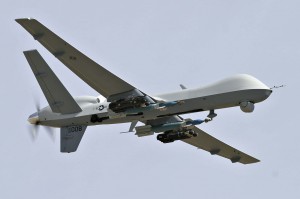 General Atomics Aeronautical Systems, Inc. (GA‑ASI), a leading manufacturer of Remotely Piloted Aircraft (RPA), tactical reconnaissance radars, and electro-optic surveillance systems, today announced the successful first flight of the Block 1-plus Predator B/MQ-9 Reaper, an upgrade to the original Block 1 Predator B that has been in production since 2003. The MQ-9 Block 1-plus test flight occurred on May 24 at the company’s Gray Butte Flight Operations Facility in Palmdale, Calif., with no discrepancies.

“We continue to enhance the capabilities of our aircraft, improving their performance to meet emerging customer requirements,” said Frank Pace, president, Aircraft Systems Group, GA-ASI. “The first flight of the MQ-9 Block 1-plus follows in the footsteps of the aircraft’s combat-proven Block 1 configuration and is an important technological achievement that will provide increased effectiveness, increased multi-mission flexibility, and even greater reliability.”

The MQ-9 Block 1-plus is a capability enhancement over the Block 1 configuration, which has amassed more than 420,000 flight hours across all customers. Block 1-plus was designed for increased electrical power, secure communications, auto land, increased Gross Takeoff Weight (GTOW), weapons growth, and streamlined payload integration capabilities.

With the completion of development, testing, and expected Milestone C decision this fall, follow-on aircraft to the MQ-9 Block 1-plus configuration will be designated “MQ-9 Block 5.”

Featuring a new high-capacity starter generator, the aircraft offers an increase in electrical power capacity over the current Block 1 design. This increased power provides the aircraft with significant capacity for growth. In addition, the upgraded electrical system includes a backup generator which is sufficient to support all flight critical functions. This vastly improves the reliability of the electrical power system by providing three independent power sources.

Additionally, the new trailing arm main landing gear will be included in Block 5, enabling the aircraft to carry heavier payloads or additional fuel.

Predator B is currently operational with the U.S. Air Force and Royal Air Force as MQ-9 Reaper and the Italian Air Force as MQ-9, with NASA as Ikhana, and with the U.S. Department of Homeland Security as Predator B/Guardian. The aircraft is designed to perform multi-mission ISR and “Hunter-Killer” missions over land or sea, with more than 130 vehicles delivered to date.