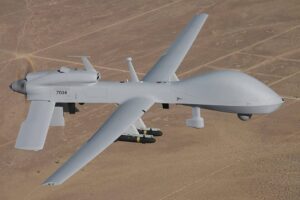 General Atomics Aeronautical Systems, Inc., a leading manufacturer of Unmanned Aircraft Systems (UAS), tactical reconnaissance radars, and electro-optic surveillance systems, has announced that its Gray Eagle® UAS has reached a record 10,000 successful automatic launch and recoveries with the Automatic Takeoff and Landing System (ATLS). The milestone was achieved on June 2 while it performed a routine surveillance mission in support of Operation Enduring Freedom.

In less than two years, cumulative flight hours for the Gray Eagle fleet have more than doubled, serving as a testament to the growing demand by the Army war fighter for this highly reliable, durable, and operationally flexible aircraft. Currently flying 2,300 flight hours per month across six deployment and training sites, the Army’s Gray Eagle Block 1 aircraft has accumulated more than 35,000 flight hours since it was first deployed in 2008. Today the fleet has grown to 50 aircraft and maintains a greater than 80% system operational availability rate.