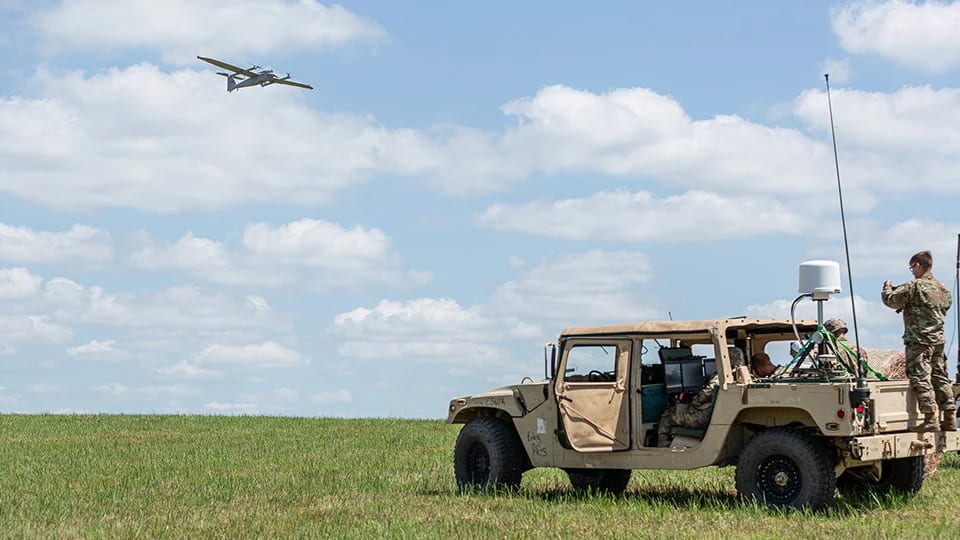 Inmarsat Government has released the following article detailing how its L-band Airborne Intelligence, Surveillance and Reconnaissance (LAISR) payload has extended the capabilities of the JUMP 20 VTOL UAV used by the United States Special Operations Command.

For Unmanned Aircraft Systems (UAS), beyond line-of-sight (BLOS) capability has emerged as a difference-maker in the pursuit of mission success. Without BLOS, UAS flights are limited to a constrained operational range for today’s intelligence, surveillance and reconnaissance (ISR) requirements.

That is why Inmarsat Government has worked closely for two years on the JUMP 20 from AeroVironment’s Arcturus UAV in support of the United States Special Operations Command (USSOCOM). During this time, Inmarsat Government has provided its L-band Airborne Intelligence, Surveillance and Reconnaissance (LAISR) solution for the JUMP 20, while significantly reducing size, weight and power (SWaP). This empowers the JUMP 20 with BLOS capabilities, extending its operational range to 115 miles.

The JUMP 20 is a vertical takeoff and landing (VTOL), fixed-wing unmanned aircraft for advanced multi-sensor ISR. With more than 14 hours of endurance and a performance altitude of 17,000 feet, the JUMP 20 establishes ideal support for multi-mission execution. It is runway independent, so operators can set up the system and deploy it in less than an hour without the need for launch or recovery equipment.

With a useable payload capacity of up to 30 pounds, the JUMP 20 offers flexible payload options utilizing industry-leading imaging sensors such as ARCAM 45D and long range EO/MWIR as well as onboard tracking, stabilization and video processing. In addition to the multi-mission payload bay and superior optics, the JUMP 20 features a common autopilot and ground control system architecture to create a highly customizable, modular platform that can be tailored to meet operational or customer requirements.

For the JUMP 20 and other UAS, SWaP remains a critical challenge to address. If a payload is too large or heavy, operators are often forced to reduce fuel capacity, and go without BLOS capabilities. Inmarsat Government lowered the weight of the LAISR payload for the JUMP 20 from more than 30 pounds to 8.6 pounds.

With this, JUMP 20 operators take advantage of LAISR, which delivers reliable high-throughput BLOS connectivity for small UAS Group aero platforms worldwide, with service capable of achieving up to 3 Mbps+ in both directions. With LAISR, users get uniform coverage and always-on airborne ISR capabilities throughout the complete coverage area of Inmarsat ELERA global network. Service plans are available for global and regional applications. Inmarsat Government configures LAISR to meet the unique requirements of its customers, and its U.S.-based, security-cleared operations and engineering teams manage it 24/7/365.

In addition to LAISR, Inmarsat Government is using a Ka-band link through the Inmarsat Global Xpress gateway to allow the LAISR solution to connect from the ground to the JUMP 20 when it is in the air.