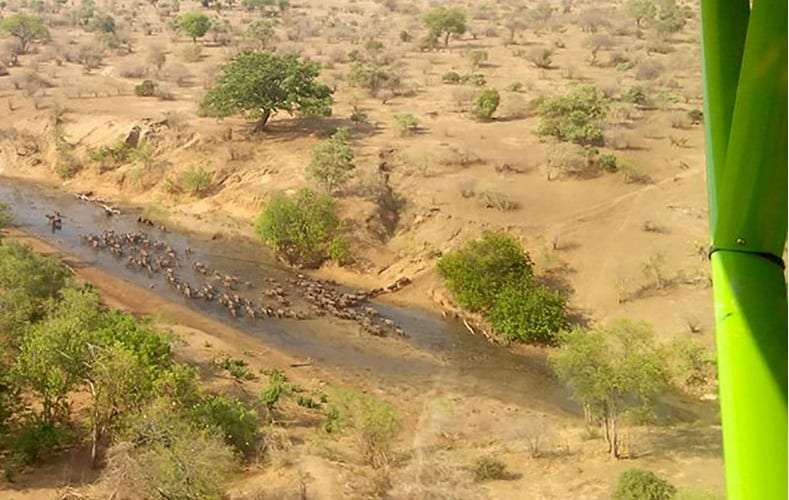 LightWare LiDAR has released the following case study detailing how the company’s SF30/D laser measurement sensor has been used by the conservation group Flying for WildLife Trust to help monitor elephant and rhino populations from the air.

What is Flying for WildLife about?

In August 2015 a group of Zimbabwean ultralight pilots flew more than 15 flights spanning a 3 day period as a pre-game count familiarization flights over the Matusadona National Park at the request of the WildLife and Environment Zimbabwe (WEZ). This proved to be a proof of concept and spawning ground for the Flying for WildLife Trust – a non-commercial trust that was consequently born out of a concern for the plight of Zimbabwe’s wildlife, with particular emphasis on elephant and rhino populations.

The main objective of the trust is to provide Zimbabwe National Parks Wildlife Management Authority and other stakeholders with regular aerial surveillance and monitoring over wildlife areas and national parks at no cost. Since its inception Flying For WildLife pilots have already flown National Parks officers, researchers and anti-poaching units over various areas in the Zambezi Valley.

The activities of the Trust are extremely valuable to conservation efforts and are made possible by kind donations of fuel, accommodation and logistics from all those involved and, of course, the good will of the pilots. The Trust currently owns 2 ultralight Savannah aircraft that are operated by volunteer pilots. All the Trust’s activities are non-commercial and non-profit.

An urgent need for conservation efforts

Regionally a poaching epidemic has decimated the once thriving elephant populations of the Southern African region. The Great Elephant Census funded by Paul Allen, the late co-founder of Microsoft, revealed that Zimbabwe is the custodian of the world’s second highest population of elephants equal to the elephant populations of Kenya, Tanzania and South Africa combined.

The elephant is an iconic species and they are a great indicator of what’s happening in conservation in an area. The 2014 survey revealed that Zimbabwe is home to the 2nd largest population of elephants in the world – equal to Kenya, Tanzania and South Africa combined. But then if you look at the Zimbabwean conservation resources, and what Zimbabwe has in place for conservation, the national parks don’t have a single operational aircraft that they can use. This in contrast with Kenya, for example – the Kenyan Wildlife Services has got over 14 aircraft and many helicopters along with aircraft supplied by multiple NGOs. All this is important when you realize that an elephant count should happen every five years. But in Zimbabwe they are lucky if it’s every 10 years because there just isn’t the funding.

The team at Flying for WildLife are trying to conserve Zimbabwe’s natural heritage with very, very, very little resources – not in the least part as Zimbabwe is often viewed as a pariah state as a result of their historical geopolitical situation. Consequently conservation just doesn’t attract the funding that it does elsewhere. So it’s often left to ordinary Zimbabwean citizens and concerned parties who love the bush and wish to preserve its heritage – and that is how Flying for WildLife was born.

But why count elephants?

Elephants are important to count for a number of reasons. First of all, if you have an area with too many elephants, it can be very destructive to the environment and that needs to be carefully managed. But likewise, if you have an area that’s under pressure with illegal poaching activity, it’s very often the elephant that is affected first. Elephants are intelligent, they often move off when threatened, which then changes the ecosystem they leave behind. Thus keeping an eye on regular elephant numbers is a critical tool in understanding what’s happening in the conservation of an area.

The team at Flying for WildLife saw that there’s a desperate need for flight-enabled conservation, especially when you realize that what they can do in two hours will take someone on the ground in a vehicle, probably two or three months. So aviation is a very important tool in conservation.

Flying for WildLife uses the LightWare SF30/D running on a custom built LightWare app which runs on either an Android tablet or even a phone – doing two things. Firstly, it gives a very clear display for the pilot as regards altitude – height above ground level – allowing the pilot to adjust the plane up or down to maintain the desired 300 foot above ground level – the standard optimal altitude for this type of flight.

Secondly, it gives you a very prominent GPS time. This is the critical thing. It displays the time to the second. So the app gives you your AGL, GPS time, airspeed and then has an event logging function. Now you can start logging locations whilst it records that GPS location, your height above the ground and your speed every second. This allows you to flag an exact position for more detailed ground-based inspection.

In addition the Flying for WildLife team have got cameras that are taking photographs every two seconds on both sides of the aircraft. The idea being these photographs are used to validate any sightings seen utilizing the displayed GPS time as the common factor.

The aerial perspective provided by Flying For WildLife’s aircraft is of enormous value to field operations. The flights open up the exploration and monitoring of remote, rugged and expansive areas which are otherwise often left unpatrolled. Flying for WildLife provides time-critical conservation intelligence which promotes informed decision-making, and increases the efficiency and effectiveness of our conservation partners’ work. Their flights enable conservation and research officers to quickly cover large tracts of wilderness, accomplishing in a two-hour flight what would take weeks to complete on the ground.