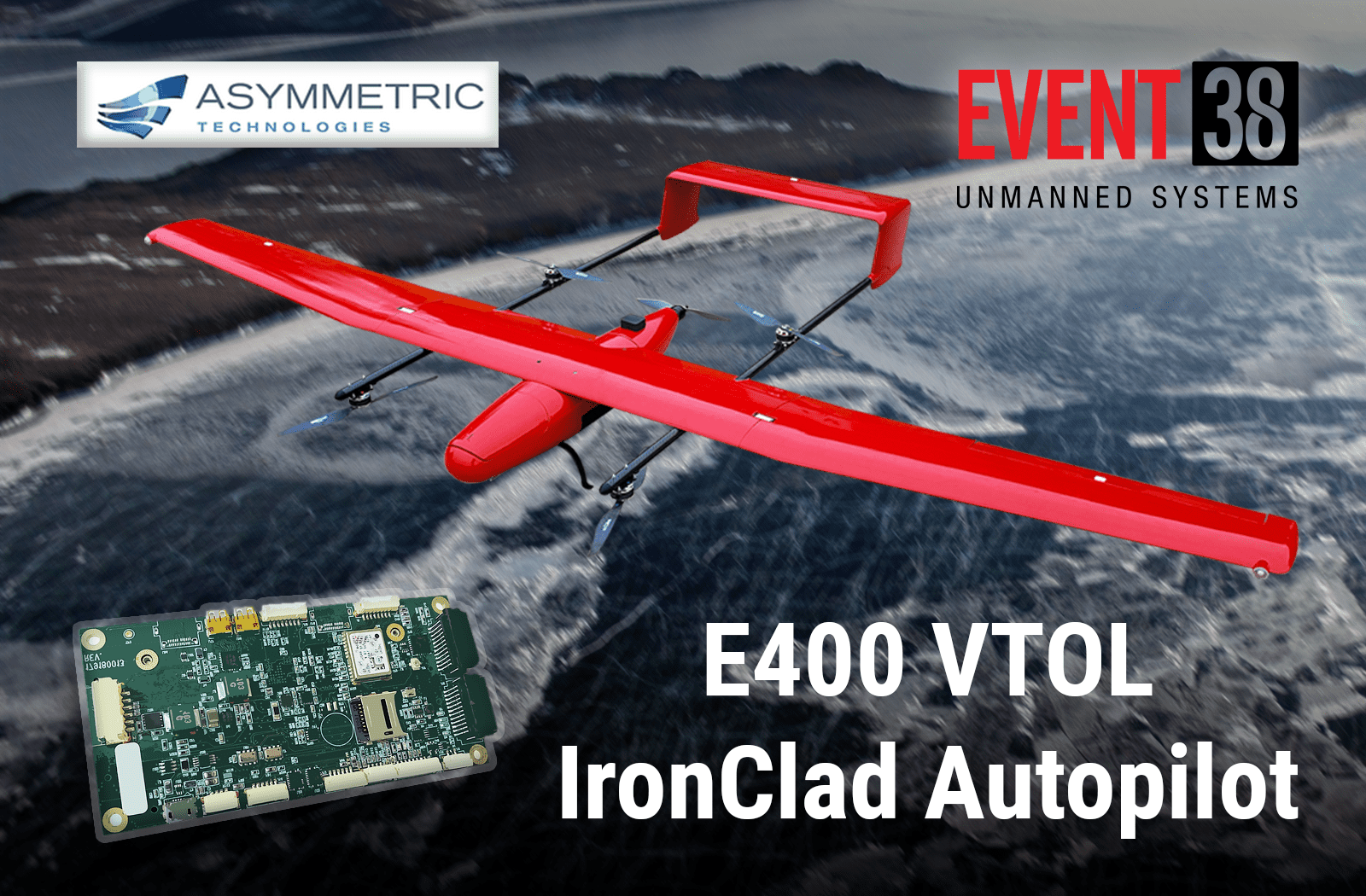 Ironclad is a secure flight controller designed with advanced encryption and security features that meet the rigorous requirements of Department of Defense (DoD) users and other high security missions.

The controller is compatible with PX4 and Ardupilot, two of the most popular open-source software programs for flight controllers and autopilots. Because of this, Ironclad users can design specialty features and customize the program to suit their needs.

Asymmetric received funding from the US Air Force Research Laboratory (AFRL) to elevate Ironclad to a complete solution, so the company decided to partner with a quality UAV platform.

“Ideally, we were looking for something American made from a company that had worked with the Department of Defense before,” said Rob Hettler, president of Asymmetric. “But there aren’t many companies making purely American platforms right now.”

Hettler approached Jeff Taylor, president of Event 38 Unmanned Systems, to discuss a possible collaboration. The two agreed that the best platform for demoing Ironclad’s capabilities and features was the E400, a fixed-wing drone with Vertical Take-Off and Landing (VTOL) capabilities.

“We made a custom version of the E400 for the Asymmetric team,” said Taylor. “It has all the premium features of a standard E400, such as the hot-swap payload bay, the range, the VTOL capabilities, and the battery pack. The E400 has its own high-level security features and is compatible with open-source programming, so Asymmetric can integrate their own flight controller on a secure platform.”

Event 38 ran trials with the Air National Guard on a military-grade drone that became commercially available early 2022 as the E400.

“The E400 is a solidly built, really nice platform. It’s the best-looking platform in our lab,” said Hettler. “And we’d much rather work with a company up the road in Ohio than halfway across the country or around the world.”

The E400 is a carbon fiber, fixed-wing VTOL drone with a flight time of 90 minutes and a payload capacity of five pounds. The E400’s origin story can be traced back to 2019, when Event 38 partnered with the Air Force Rapid Sustainment Office (RSO) to explore VTOL functionality for fixed-wing aircraft.

“AFRL isn’t using pure multirotor drones much. The vast majority of their drones have been fixed wing up until now,” said Hettler. “But these platforms often need dedicated runways and support equipment that won’t necessarily work in the field. A VTOL hybrid platform like the E400 gives them the luxury of straight, vertical lift-off. They don’t need the runway, but they can still do fixed-wing missions. AFRL is excited about testing this platform.”

Ironclad is designed with a range of premium encryption features, including initial user authentication, secure connection, and anti-tamper features that will wipe encryption keys in an emergency situation. For example, if a drone with an Ironclad autopilot were to crash in unfriendly territory, Ironclad could erase sensitive data automatically, before it could fall into the wrong hands.

“This collaboration between Event 38 and Asymmetric represents the growing number of possibilities for drone technology and the E400,” said Taylor. “We’re combining the security offered by the Ironclad autopilot with the long flight time and other features of the E400 to create an incredibly valuable tool.”