The Military Robotics and Autonomous Systems USA Conference will feature briefings on how human-machine teaming will enhance the operational and institutional effectiveness of the US Army, international allies, and its partners News By Phoebe Grinter / 24 May 2022 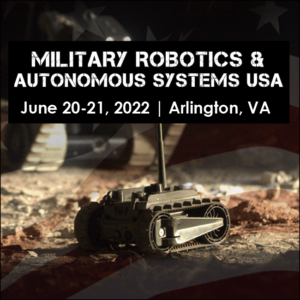 SAE Media Group has announced that branches of the US Army will be sharing insight into their developments in human-machine teaming at the Military Robotics and Autonomous Systems (MRAS) USA Conference, in Arlington, VA, June 20-21, 2022.

Inside the US Army’s plan for autonomous weapons is the idea to leverage and integrate the best attributes of both human cognition and machine-enabled autonomy.

“The guidance that we’ve received from our most senior leaders is to use capabilities like artificial intelligence, or advanced robotics, to augment soldiers, not necessarily to replace them,” Maj. Gen. John Rafferty, director of Army Futures Command’s Long Range Precision Fires Cross-Functional Team, commented in an interview.*

The upcoming Military Robotics and Autonomous USA Conference will feature in-depth briefings on how human-machine teaming in the future will enhance the operational and institutional effectiveness of the US Army, international allies, and its partners.

The speakers and their presentations covering human-machine teaming include:

With extensive support from the US Army and wider Department of Defense (DoD), and an unrivalled speaker line-up, the agenda for Military Robotics and Autonomous Systems USA 2022 will provide key updates on the enormous investment in land robotics from US forces and international militaries, with the aim to increase warfighter lethality and remove soldiers from dangerous situations.

To view the full agenda and speaker line-up, download the brochure>