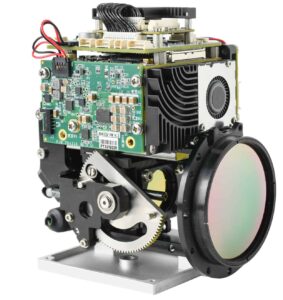 An innovative new micro camera system has been developed by Sierra-Olympic Technologies for low-SWaP applications. The Ventus Micro is now the smallest mid-wave infrared sensor on the market.

The project has been more than three years in the making; a new sensor and optic had to be custom developed to adhere to the strict size, weight and power constraints of the design.

“The Ventus Micro was conceived for our airborne customers, who are always looking to get the highest performance possible per unit gram,” said Chris Johnston, Sierra-Olympic Technologies President. “The design was motivated by a customer who wanted to fit a mid-wave sensor with approximately a two-degree horizontal field of view when zoomed in, into a 6-inch articulating volume. That’s not as straightforward as one might think. We worked on optic and sensor development over a period of years to perfect the design. We’re now at a point where all the elements have come together and are performing very well and very reliably.”

To meet the project’s stringent design challenges, Sierra-Olympic developed a custom 180-degree folded optic that provides a 16-180 mm EFL (22.6 -2.0 ° FOV). On the sensor side, the Micro is built around an innovative new high-operating temperature (HOT) detector that requires less cooling to operate and, as a result, extends the life of the system, decreases time to image, lowers power usage and decreases overall cost of ownership.

The Micro is one of several cameras in the Ventus family of cooled mid-wave infrared systems. The Ventus OGI is a breakthrough optical gas imaging camera designed for visualizing hydrocarbon gases and the three-camera Ventus HOT series is designed for long-range security and surveillance applications.

“All Ventus cameras, as well as our Vinden family of uncooled long-wave cameras, share commonalities in design, integration and protocols that bring consistency across our product lines,” Johnston said.

For more information or to arrange a demo of the Ventus Micro, or any other Sierra-Olympic camera, visit www.sierraolympic.com.