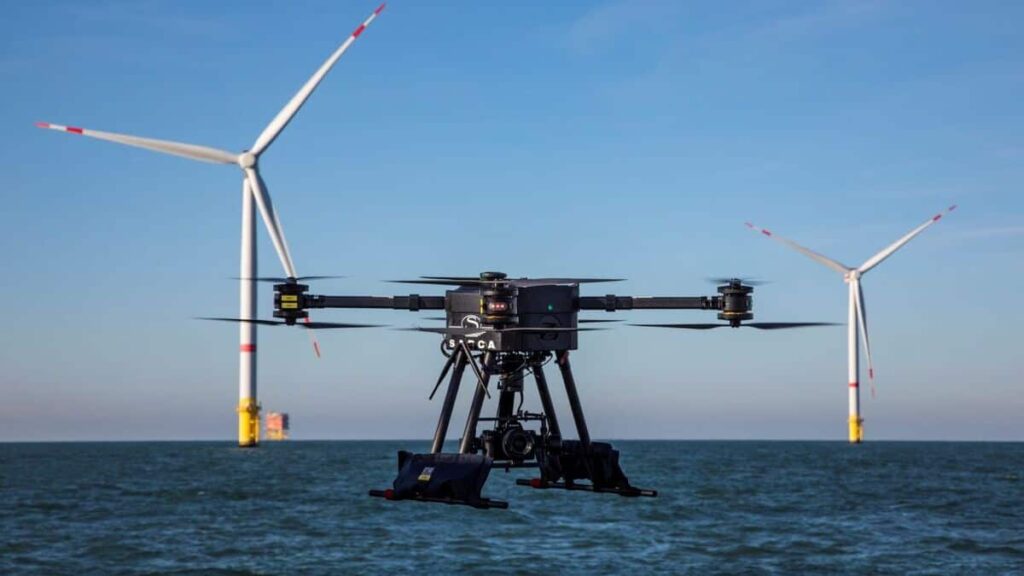 DEME Offshore and Sabca have successfully tested autonomous drone operations at the Rentel wind farm off the coast of Belgium. The tests, which according to DEME are the first commercial cross-border BVLOS (beyond visual line of sight) drone operations to take place at offshore wind farms in the North Sea, are the first step in replacing traditional manned methods for a variety of operations.

A diverse range of tests were performed for a variety of use cases, including search and rescue operations, environmental surveys, turbine and substation inspections, and parcel deliveries. Both a multicopter drone and a fixed-wing surveillance drone with a wingspan of more than 3 m were deployed in parallel. The long-endurance surveillance drone took off from the Belgian coast and flew all the way to the Rentel wind farm more than 35 km away. The automated multicopter drone performed inspections and cargo flights from the substation and vessels, and also conducted a full search and rescue demonstration using infrared detection and life buoy dropping.

By combining the drone operations with the use of artificial intelligence for automatic image processing, a strong set of tools has been developed to automate operations which are currently being executed by people. The two companies believe that these solutions can be applied beyond the offshore wind industry to a range of safety-critical missions at sea or on land.

Bart De Poorter, General Manager at DEME Offshore, commented: “We are convinced that these innovative, advanced technologies, which focus on fully autonomous operations without the need for any vessels and people offshore, have a game-changing potential to increase safety, lower the impact on the environment in the O&M phase of a project, and reduce the overall costs. Ultimately, we expect unmanned vehicles to contribute significantly to a lower Levelised Cost of Energy.”

Thibauld Jongen, CEO of Sabca, said: “Sabca uses its experience in the aviation and space industry to develop aviation-grade systems that allow safety-critical missions to be performed in the most stringent conditions. Safety is the most important aspect when operating above cities, near critical infrastructure and in the controlled airspace. Therefore, we are running different projects where we test our systems to their limits. These successful missions with DEME Offshore confirm the commercial possibilities of our systems and are a next step after having performed other firsts, such as medical transport missions over Antwerp and several cargo transportations over land.”