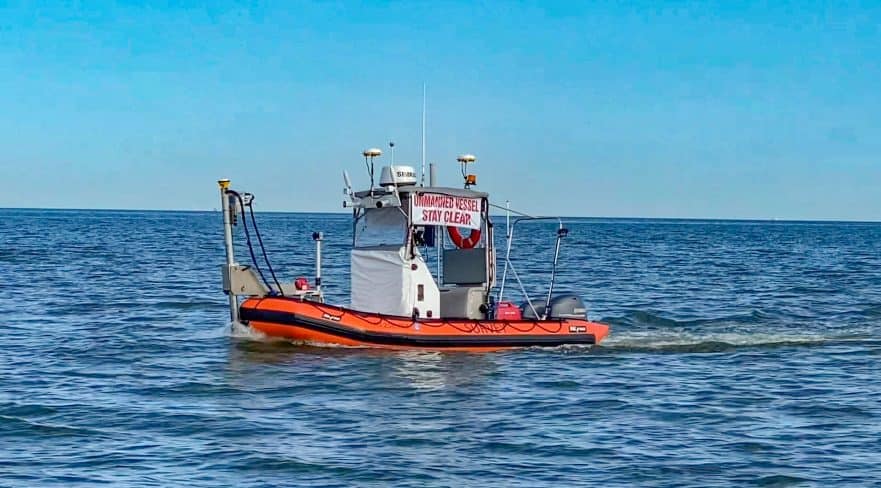 Sea Machines Robotics’ SM300 autonomous-command and remote-helm control system has been used by DEA Marine Services to convert its Sigsbee survey boat into an unmanned surface vessel (USV), in order to undertake a contract with the National Oceanic and Atmospheric Administration (NOAA). DEA is using the vessel to survey more than 3,500 nautical miles of the Western Galveston Bay, near the Houston Ship Channel.

The converted Sigsbee is collaboratively following another DEA-staffed hydrographic survey vessel, which is serving as the mothership. The combination of the two ships will allow DEA to cover the Bay’s large and shallow survey areas more efficiently than a traditional, completely manned survey operation. DEA operators located aboard the mothership are commanding the autonomous Sigsbee as it conducts survey missions seven days per week, effectively doubling the conventional productivity of this type of survey.

The combination of the SM300 autonomy and remote control kit with DEA’s technical advancements provide the following enhancement for survey vessel operations:

Phil Bourque, Director of Sales at Sea Machines, commented: “Deploying the SM300 system for this mission is allowing DEA to conduct marine surveys with improved predictability, speed of data collection and at-sea safety. The integration with systems like Hypack are streamlining operations for surveyors and demonstrating our commitment to being a best-in-class technology provider. Sea Machines is pleased to to support DEA and NOAA during this critical mission and others like it in the future.”

Jon Dasler, senior vice president and director of DEA Marine Services, said: “DEA is committed to the advancement of technology and being on the leading edge. We see autonomy as the future of hydrography and have enjoyed working with Sea Machines and additional software vendors for continued improvements in autonomous operations and the use of artificial intelligence in data processing.”