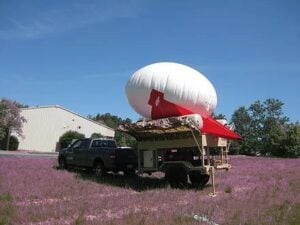 Carolina Unmanned Vehicles (CUV) has delivered two of the company’s 45 cubic meter Allsopp Helikite tactical unmanned aerostats to support a defense developmental program. The aerostats will be used to elevate various electronic sensors and payloads, and the Helikite is particularly suited to this application due to its high level of stability and ability to operate in high winds.

The Helikite aerostat is used in CUV’s Small Tactical Multi-Payload Aerostat System (STMPAS), a mobile trailer-mounted system designed for 24/7 military ISR (Intelligence, Surveillance and Reconnaissance) operations, as well as border surveillance and post-disaster emergency communications. STMPAS was originally developed for the US Army as an ISR capability for small tactical units in battlefield locations.