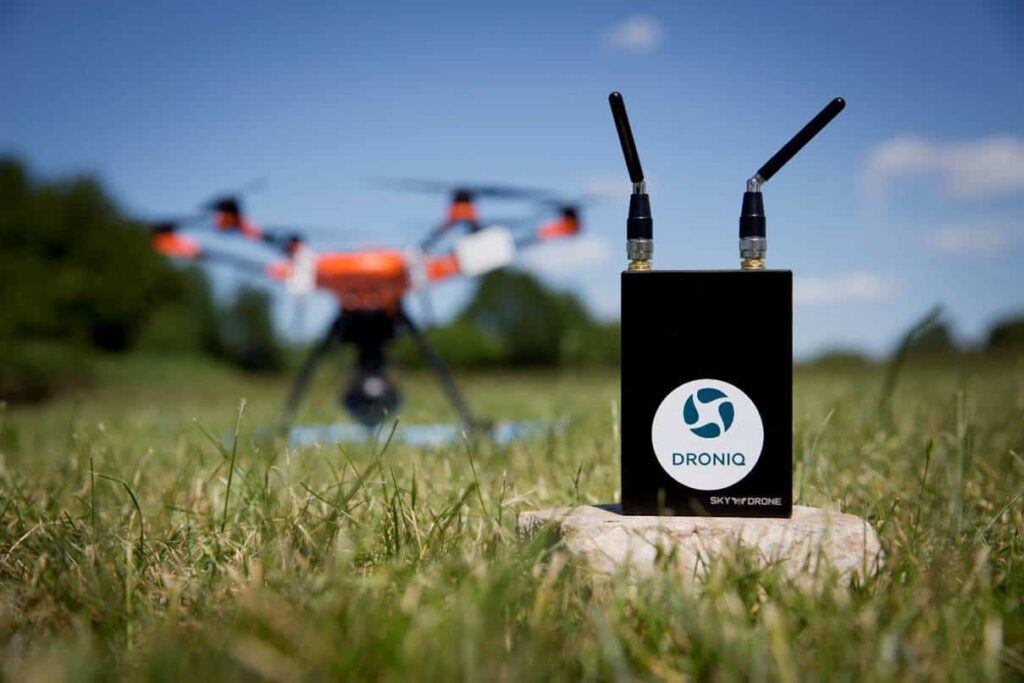 Droniq and Sky Drone have formed a partnership that allows Droniq to use Sky Drone’s unique UAS (unmanned aerial system) command and control technology remotely in real-time over unlimited ranges. Droniq will use this technology to provide a hardware solution that enables drone location and control, as well as data transmission, for BVLOS (beyond visual line of sight) operations.

This new system will form part of the UTM (UAS Traffic Management) solution that Droniq offers to the German market, allowing the safe integration of drones into civilian airspace and unlocking the potential for broad commercial use of drones over large distances.

The 4G/LTE network of Deutsche Telekom will be used for low-latency transfer of real-time command and control, video, sensor and telemetry data between drones and ground control stations (GCS). This complements Droniq’s LTE-tracking module know as HOD4track (Hook-On-Device), which broadcasts its position once per second via the mobile network to the UTM system, as well as signals received from helicopters, gliders and small aircraft in the vicinity. The HOD4track also broadcasts its own position so that the drone can be recognised by the other aircraft.

The new hardware product, known as HOD4command, adds real-time communication with the drone over unlimited distances. It can be mounted onto any UAS and integrates seamlessly with a variety of drone autopilots. Data communication is end-to-end encrypted and protected from unauthorized access. HOD4command is based upon Sky Drone technology already in use in Africa and Europe to deliver medical supplies to hard-to-reach settlements, and for the inter-site logistics of a large pharmaceutical company in Germany.

HOD4stream, a structurally identical product, provides a larger data plan that allows real-time transmission of video, sensor and telemetry data. It is designed for industrial applications such as utilities and infrastructure maintenance and inspection, as well as remote situational awareness for first responders.

Ralph Schepp, COO of Droniq, commented: “Sky Drone perfectly complements the UTM approach of Droniq and is an essential building block for making BVLOS flights reality. We’ve seen the technology being used at several of our customers in Germany and are absolutely convinced of Sky Drone’s technology and their pragmatic mentality.”

Boris Boege, CEO of Sky Drone, stated: “Droniq is the ideal partner for our real-time communication system for drones that’s already being used across the globe. Their reach in Germany and Europe allows the efficient use as well as safe integration of drones into the public airspace.”