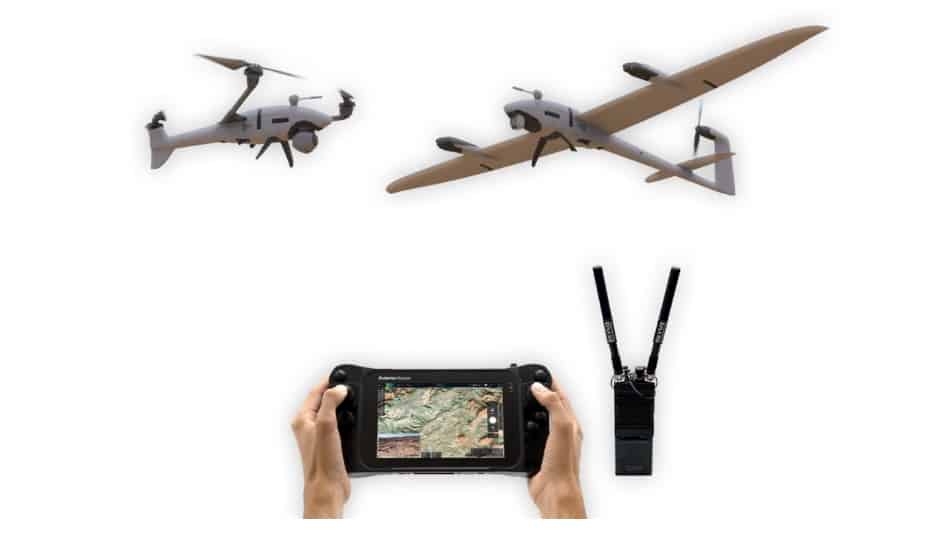 The MN-MIMO technology in the Silvus 4200 and 4400 Streamcaster series radios provides high speed, tactically secure data, and high definition video communications for drones operating in challenging RF environments. The integration of Mobile Ad Hoc Network (MANET) radio capabilities will enable robust, assured networking between the UAVs and the ground control station (GCS), as well as interoperability with other nodes on the network.

Vector and Scorpion form a versatile two-in-one system. Scorpion is a tri-copter drone that can be utilized in dynamic urban environments and for other missions that require both maneuverability and stable hovering in order to collect ISR (intelligence, surveillance and reconnaissance) and situational awareness information. Scorpion can be transformed into Vector by swapping out the rotors and attaching fixed wings and a tail section to the base fuselage, creating an energy-efficient, fixed-wing VTOL platform for longer range, longer endurance ISR missions.

Auterion GS has partnered with Quantum-Systems into order to bring the Vector and Scorpion sUAS to U.S. Government defense and security markets. The pairing of Silvus’ MN-MIMO technology with this versatile drone system will provide long range, robust, and reliable communications and surveillance capabilities suitable for rugged and rapidly changing environments.

Florian Seibel, CEO of Quantum-Systems, commented: “We have tested several tactical mesh radios in several scenarios before making our decision to go with Silvus: range, reliability and performance are class-leading. Because there are versions available from Silvus that are non-ITAR, this will help to sell our Vector and Scorpion on a global scale.”

David Sharpin, CEO of Auterion GS, said: “We are very pleased to announce our partnership with Silvus Technologies as we bring Vector and Scorpion to US Defense and Security markets. Flexible, multi-node, tactical networking is a key element of our sUAS ecosystem. Last week we announced our Skynav Gov scalable ground controller. Silvus radios will be integrated with Skynav controllers which will in turn be integrated into the Vector/Scorpion sUAS product offering in the US.”

Kasey Cooper, Director of Unmanned Systems for Silvus Technologies, stated: “The partnership between Quantum-Systems, Auterion GS, and Silvus Technologies aligns with our desire to collaborate with cutting-edge companies and technologies. This teaming will give our customers, foreign and abroad, a highly sophisticated end-to-end solution for their sUAS needs. The Vector and Scorpion 2-in-1 sUAS system kit solves a long standing CONOPS [concept of operations] problem I’ve seen. The quick reaction capabilities of a small VTOL and long endurance desires of a fixed-wing, all in one kit.”