FLIR to Provide Centaur UGVs to US Marine Corps 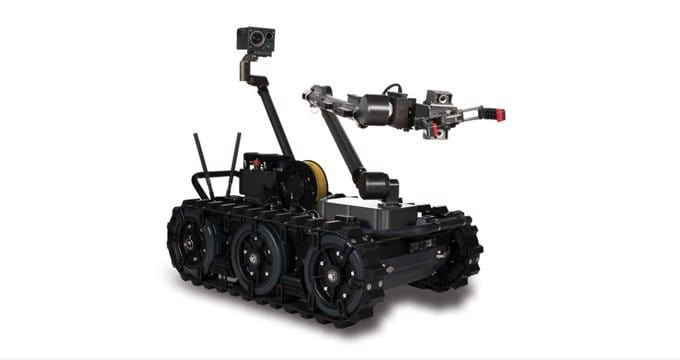 FLIR Systems has entered into a contract with the U.S. Marine Corps to provide over 140 of the company’s Centaur unmanned ground vehicles (UGVs) and spares. The contract was sourced through the U.S. Department of Defense Man Transportable Robotic System Increment II (MTRS Inc II) program, and is worth $18.6 million.

The Centaur is a medium-sized UGV weighing approximately 160 pounds that provides a standoff capability to detect, confirm, identify, and dispose of hazards such as improvised explosive devices (IEDs) and unexploded ordnance. Developed with an open architecture, the robotic vehicle can climb stairs and features an advanced EO/IR camera suite and a manipulator arm that reaches over six feet. It can be fitted with a variety of modular payloads for other missions such as CBRNE (Chemical, Biological, Radiological, Nuclear, and Explosives) detection.

The U.S. Army previously selected Endeavor Robotics, which has since been acquired by FLIR, to provide medium-sized UGVs for the MTRS Inc II program. The Centaur was designed specifically to fulfil this role, and FLIR continues to deliver units to the Army under that multi-year program of record. The U.S Air Force has also recently ordered almost 200 Centaurs.

David Ray, president of the Government & Defense Technologies business at FLIR, commented: “Centaur gives the Marines a multipurpose, mid-sized UGV that will complement the FLIR PackBot, SUGV and FirstLook robots we continue to provide to the Corps. We’re honored the Air Force and now Marines are choosing Centaur as an EOD platform-of-choice, and pleased the U.S. Army MTRS Inc II program can serve as a procurement channel.”